Welcome back, campers! Ready for Chapter 5?

Last week our campers took to the skies, and we learned that Argee likes crossword puzzles. And apparently the mysterious voice in Felix’s head does too…

Let’s continue with the story! Now listen close campers, where were we. Ah yes…

This week’s episode art is a camper spotlight of Drew, the Flora Photographer.

Felix says “Drew the Centaur is always happiest when he’s taking pictures or discovering weird plants. Sometimes, if he’s lucky, he can do both at the same time, like when he stumbled across a fully-matured Mandrake. I didn’t stick around to see how things turned out, though. Never trust foliage that might be smarter than you. It’s a rule of mine.”

Drew was invented by Kate Trgovac. You can find the picture of him on the Camp Myth webpage.

Welcome back, campers! Ready for Chapter 4?

Last week we learned Felix is a fae, and we met both Argee the Cyclops and Lil the Dryad. And did Lil just say flight? I hope Felix and Argee aren’t afraid of heights!

Let’s find out what happens next! Now listen close campers, where were we. Ah yes…

Felix says “Fae aren’t known for their creativity, but Sebastian is able to build Golems that are incredible works of art. For some reason, though, he keeps calling them “Marionettes.” When I asked if he could teach me his secret, he told me to look up some school named “Vermilion Academy.” I’ll have to check it out!”

Sebastian was created Studio Kontrabida. You can find the picture of him on the Camp Myth webpage.

Welcome back, campers! Ready for Chapter 3?

Last week Felix checked in for his journey to summer camp. We saw more of the creatures Felix shares his world with, and we learned about all the types of supernatural contraband the camp keeps an eye out for. I wonder what golem scrolls do…

This week’s camper spotlight is Amelia, the Aquatic Animal Admirer.

Felix says “Sirens are known to form lifelong bonds with sea creatures, which explains why Amelia found it so hard to leave her pet Tiger-Dolphins, Umbra and Penumbra, back home for the summer. I drew this picture to help make her feel better. Also, to learn more about Tiger-Dolphins. Turns out, it’s a Siren thing. Figures.”

Amelia was created by Dwayne Hart. You can find the picture of her on the Camp Myth webpage.

Welcome back, campers! Ready for Chapter 2?

Last week you met Felix, the protagonist of our story. Felix is obsessed with the human world, and he offered to tell you this story in exchange for learning more about human history. Did you take him up on it? Let’s see what Felix has to tell us this week.

This week’s camper spotlight is Zerra, the Solitary Shifter.

Felix says “Kitsune tend to be loners by nature, but Zerra takes having personal space to the next level. I managed to stumble upon her hideout in the Forgotten Forest, and it’s actually nicer than a lot of the cabins! The best part, though, is her Roc feather hammock. Wish I’d thought of doing that.”

Zerra was invented by Magentawolf. You can find the picture of her on the Camp Myth webpage.

Hello campers! Are you ready for supernatural summer camp? We’ve been so excited getting this story ready for you, we hope you enjoy it! Welcome to Phoenix Watching, the first Camp Myth novel by Chris Lewis Carter.

Don’t forget to check out the Camp Myth section of our website where you can find links to all the episodes each week as well as artwork. You can even buy your own copy of Phoenix Watching or the Camp Myth role playing game.

Now listen close campers, we’ve a tale to tell! And it all started like this…

Each week in addition to a chapter of Phoenix Watching, we’ll share with you a piece of art featuring another camper at Camp Myth.

This week’s camper spotlight is Kaelan, the Centaur Inventor.

Felix says “So what if Kaelan needs a brace on his back leg? He’s without a doubt the smartest Centaur I’ve ever met! In fact, his backpack full of spare parts always manages to have the right tool for the job. He’s even working on a special GPS program to help Minotaurs with navigating their labyrinths. Talk about innovation!”

Kaelan was invented by Andrew Webster. You can find the picture of him on the Camp Myth webpage. 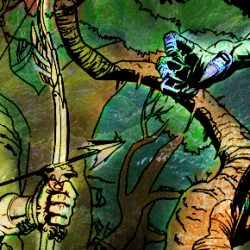 After nearly twenty minutes of trudging through the Forgotten Forest in silence, Zerra plops down on a rotting log and says, “It’s official. We’re lost.”

“That’s impossible,” Drew says. He removes a crumpled sheet of paper from his bag and studies it intently. “I’ve mapped out this entire area. We just need to get back on course.”

Natious grunts. His steel blue eye scans their surroundings for any sign of danger. “And what does the map say, exactly?”

Before Drew can respond, the trees part and two more centaurs join the group. Kaelan, lugging his overstuffed backpack, and Pointa, trying to prevent any branches from swatting his girlfriend, Kuru, a Kitsune who sits perched on his back.

“Come on, guys, arguing isn’t going to help,” she says, in her always-upbeat tone. “There’s got to be a Phoenix around here somewhere. We just need to stay positive.”

Pointa nods and brushes a stray leaf from his beard. “She’s right. Let’s just take a moment to regroup, then keep moving.”

Kaelan hobbles over to the log, his leg brace squeaking slightly with each step. “Do you think the other group we saw heading into the forest are Phoenix watching, too? I wonder if they’ve found one by now?”

“Those three?” Natious snorts. “Not a chance. They’ll be lucky if they make it back to camp at all.”
END_OF_DOCUMENT_TOKEN_TO_BE_REPLACED