Fishfinger and her mom and her dad don’t ever come to church with us, so I asked her one time, did that mean that she doesn’t believe in the baby Jesus like how we do? And she said, no, they have their own God who’s different from ours and he isn’t called God his name is D-A-G-O-N, that’s how she spelled it. And he gives them gold and all sorts of things she said. And I asked why she doesn’t go to a special church so that she can pray and sing songs and she said they can’t because their God lives in the sea and they had a church at home only it wasn’t called a church but they can’t have one here because there’s no sea.

I thought that was silly, but my teacher says you shouldn’t laugh at people because their religion is different from yours, even when it is silly.

Fishfinger’s mom seems nice even though she doesn’t say much but I don’t like Fishfinger’s dad because he looks at me strange like how people look when they’re hungry. And one time I saw his neck and he had like what my goldfish his name was Goldie what my goldfish had for breathing, they are called gills. I thought he had those and I told my mom and she said that was silly because people don’t have gills only fishes do. But every other time he was wearing a big jumper and so I couldn’t see his neck and my mom said it was a dream maybe or I made it up but I didn’t but maybe it was a dream. I’ve had lots of funny dreams lately. One dream I had there was a big fish man, he was as tall as ten houses on top of each other and he wanted to eat me but then I woke up and it was only a dream. And they can’t hurt you my mom said but they can still be scary I said.

Anyway, I don’t like Fishfinger’s dad much at all. One day he asked me a funny question, he said, are you a virgin and I said that I didn’t know what one of those is except that the Virgin Mary was one and he said well if I didn’t know then I was. And Fishfinger’s mom said of course she is, don’t go asking her things like that, you’ll upset the girl she’s only eight (but I’m not I’m seven) and he told me he was very sorry and he hoped I wasn’t upset and I said it was okay but I still don’t like him.

Only I do like him a little bit because him and Mrs Fishfinger said that I can go on vacation with them if I like. They said, would I like to come and be a little friend for Samantha (that’s Fishfinger her real name) to play with. And I said that would be lovely because me and mom and dad aren’t going on vacation this year, last year and the year before that we went to stay with grandma and granddad but we can’t this year because grandma is poorly and her legs are gone funny.

And so me and Fishfinger are going to go to Innsmouth which is where she lived before she lived here and she’s going to show me all her favourite places and her old school and all sorts of things.

And Mr Fishfinger says that he will take me to the specialist place there is but it’s a secret so I can’t tell anybody but I can write it down that’s okay. It’s a big rock in the sea and they do their religion there it’s like how in our church there’s the high up place where the vicar stands only they have a big rock instead and that’s better he says because then their God can come and talk to them properly. He’s a very hungry God, Mr Fishfinger says, and if I’m extra especially good then maybe they’ll let me feed him. One time we went to the zoo and I fed the sea lions and they clapped their hands and did a dance. It’ll be just like that except better. 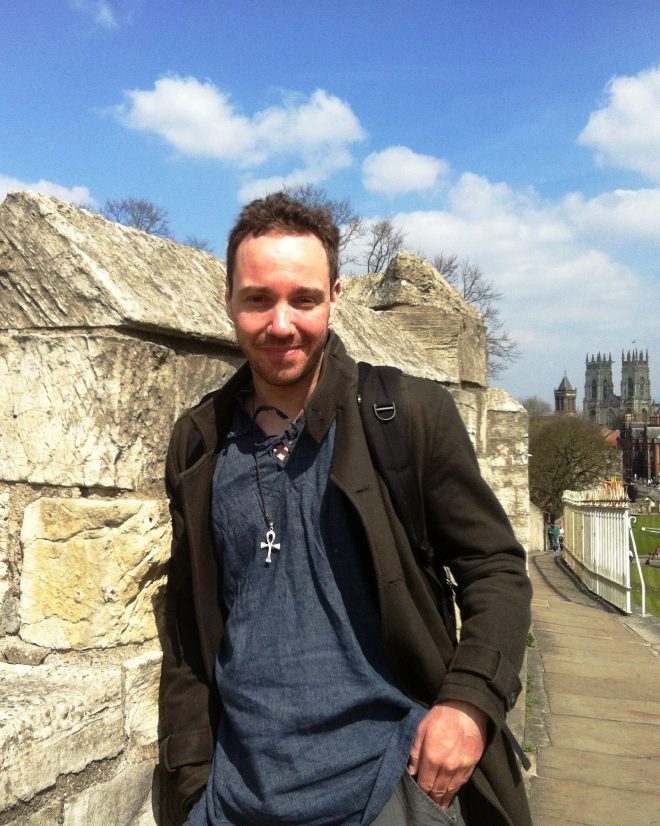 David Tallerman is the author of the YA fantasy series “The Black River Chronicles”, which began in late 2016 with Level One, the Tales of Easie Damasco series, and the Tor.com novella Patchwerk. His comics work includes the absurdist steampunk graphic novel Endangered Weapon B: Mechanimal Science and the Rosarium miniseries C21st Gods.

David’s short stories have appeared in around eighty markets, including Clarkesworld, Nightmare, Alfred Hitchcock Mystery Magazine and Beneath Ceaseless Skies. A number of his best dark fantasy and horror stories were included in his debut collection ‘The Sign in the Moonlight and Other Stories.’