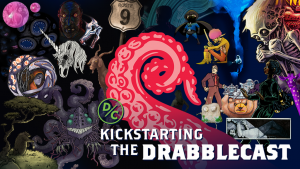 The library hadn’t been there the day before, Ella was sure of it. That patch of dirt beside the rusting piles of spaceship debris outside the refugee camp had been bare, with nothing but weeds and rocks on it. Now, there was a library there. She knew it was a library because it said LIBRARY right on it, painted in glittery letters. The word was spelled out in the twelve most commonly spoken languages and dialects in the camp. Ella recognized them all from school, even if she could only read and understand five of them. .

The building was small and rectangular. It looked like a brightly painted version of one of the metal shipping containers Ella would see at the spaceport when she went there with her friends to scavenge for leavings. Of course, you weren’t supposed to go scavenging there, but everyone did anyway. You could find anything there – scraps of metal and junky electronics for the trader, even food, if you were lucky.

Ella squinted at the library’s sign. She was supposed to come straight home after school, but school had ended early since the power went out, and Pappa wouldn’t notice she was gone until later. And who had ever heard of anyone offering books around here? Better take the chance when it was offered.

Ella opened the door and stepped inside.
END_OF_DOCUMENT_TOKEN_TO_BE_REPLACED

The Sound of Her Voice

I saw her van as I turned the corner by the convenience store.  It was exactly as I remembered it: the coat of green paint cracked and faded now, but the logo unmistakable.  It was burned into my memory like a brand.

I moved before I even realized my old instincts were kicking in, pressing myself against the brick wall and slowing my breathing so the sound would not give me away.

Every nerve in my body tingled.  I watched. I waited.
END_OF_DOCUMENT_TOKEN_TO_BE_REPLACED

“A Witch’s Guide to Escape: A Practical Compendium of Portal Fantasies”

You’d think it would make us happy when a kid checks out the same book a zillion times in a row, but actually it just keeps us up at night.

The Runaway Prince is one of those low-budget young adult fantasies from the mid-nineties, before J.K. Rowling arrived to tell everyone that magic was cool, printed on brittle yellow paper. It’s about a lonely boy who runs away and discovers a Magical Portal into another world where he has Medieval Adventures, but honestly there are so many typos most people give up before he even finds the portal.

Not this kid, though. He pulled it off the shelf and sat cross-legged in the juvenile fiction section with his grimy red backpack clutched to his chest. He didn’t move for hours. Other patrons were forced to double-back in the aisle, shooting suspicious, you-don’t-belong-here looks behind them as if wondering what a skinny black teenager was really up to while pretending to read a fantasy book. He ignored them.

The books above him rustled and quivered; that kind of attention flatters them.
END_OF_DOCUMENT_TOKEN_TO_BE_REPLACED