Spider knew exactly how things would go. How the annual event always went. Witch would not, of course, RSVP. If pressed, she would say how terribly busy she was, and how she definitely hoped to make it, but she really couldn’t say for certain until much closer to the date. But she wouldn’t RSVP later on, either. Instead, Witch would turn up at the Summer Palace of the King and Queen of Freyen-Noyen, on the night of the Ball, invitation in hand, and claim she’d found herself unexpectedly free of an evening and she trusted her gracious hosts wouldn’t mind her unannounced attendance?

Her gracious hosts, of course, wouldn’t mind at all, because Witch was a witch and not the sort of person you wanted to get into the bad books of. And all of Witch’s books were bad, just in case you were wondering, and some of them were quite full already. And, of course, her hosts knew Witch would be there and would never RSVP, because that was what she always did.

Spider also knew full well how it went year on year, because Spider was always there as well. Frozen into the shape of a jewelled broach, her legs splayed out in a most unnatural and uncomfortable position to secure Witch’s black velvet cloak around her slender throat.

And that was far from the very worst of it. Because Witch would peer, mock surprised, at the guests in their fabulous ball gowns, and then down at her sombre travelling cloak, and with eyes wide and mouth downcast she would say–as she did every year: “But I didn’t know there was a dress code!”

And the King and Queen would smile indulgently, and tell her it really didn’t matter, but Witch would shake her head, and perhaps even stamp her foot a little–which would make her Royal hosts awfully nervous–and then, and then, she’d recite the dreaded spell.

And Spider would find herself free, but before she could do as much as stretch one of her eight legs, Spider would feel an awful wrench, like she was being torn apart, and in an instant there would be eight eight-legged spiders, all identical, all her. And then again, the same painful splitting, and there would be sixty-four spiders. And again, and again, and again, eight times in total, until there were sixteen million, seven hundred and seventy-seven thousand, two hundred and sixteen spiders, all staggering at the blow of having been divided so many times.

And before she–they–could recover, Witch would give them their dress-making orders, and all sixteen million plus spiders would be spinning silk like there was no tomorrow, as the musicians fell silent and the guests and courtiers and servants turned to watch the blizzard of silk and spider legs.

And, in less than a minute, all the spiders would collapse back into one, (which was quite as horrid as being torn asunder) and that one Spider a frozen ornament, and Witch would be dressed in the finest and most fashionable of silk garments, and everyone would gasp and cheer and clap at how wickedly clever Witch was.

But Spider knew that it was she who had done all the work, she who had been ripped apart and put back together again countless times, she who had to stay frozen the rest of the evening even if there were tasty flies flitting over the pastries and cold meats, returning home hungry and tired and aching, and that, staring down at the accursed invite, was why Spider was so very fed up.

“Well,” Spider muttered, the words in synch with her desultory swing. “Not again. Never again.”

Spider thought long and hard for a way to get out of her onerous duty. Trying to hide wouldn’t do much good, because whether she was lurking in the eye socket of one of the eight skulls of former door-to-door salesmen, or hidden behind the dusty volume of Necromancy for Beginners–the least thumbed of Witch’s library–Witch would always find her.

She contemplated spinning and spinning until she had no more silk left, but that always left her completely exhausted and utterly miserable.

Also, she was keenly aware of the terrible danger of upsetting Witch. Whatever she did, she’d have to make it look like an accident.

Spider swung back and forth for the best part of a week, wracking her brain, doing the most cursory cobwebbing of the cottage, and it was only on the day of the Ball that the pieces of her plan finally fell into place. She wasn’t entirely sure it would work… but there was only ever going to be one way to find out.

As Witch busied herself with her makeup (searching for the perfect shade to compliment the green of her eyes), Spider began counting, over and over. One, two, three, four, five, six, seven–BLANK. One, two, three, four, five, six, seven–BLANK. Whenever she got to where eight ought to be, whether counting legs, or eyes, or skulls, she tried her very best to imagine there WAS no eight, that the number simply didn’t exist.

It was an hour and a moonlit coach ride later, after Witch had arrived at the Ball (fashionably late, of course) and after she had summoned Spider to build her a dress, that Spider realised, with giddy excitement, that her plan was actually working. As she busily spun the fine silk garments, one in eight spiders sat motionless, not spinning at all.

In moments, the dress was ready and Witch was handing her midnight cloak to a waiting page, and Spider was back to being a broach around her neck, and applause was echoing throughout the Grand Hall.

“How very daring,” murmured the Queen, eyebrow raised in admiration.

Witch looked down in surprise. The design was exactly as she’d specified, but it looked a little more… revealing, than she’d expected. Diaphanous, even. All over the perfectly fitted dress there were tiny gaps, hinting at the curves and flesh below, accentuating, rather than hiding.

And it seemed her dress was a veritable hit with everyone in the ballroom, particularly the gentlemen, and her dance card was quickly filled even without any messing about with love potions in the fruit punch. She smiled indulgently, congratulating herself on yet another spectacular spell.

But, as the candles in the magnificent chandeliers burnt down, as the evening wore on, and after so many dances with so many men, some clumsier than others, stray threads began to appear all over Witch’s dress. She looked down, annoyed. Shoddy workmanship. She considered, briefly, having Spider do some running repairs, but at just that moment the Baron stepped forward, the tips of his magnificent moustache waxed to needle points that reminded Witch of the cursed spindle on a spinning wheel and quite set her dark heart aflutter, and she let herself be whizzed around the ballroom in an energetic waltz.

It was the two left feet of the Prince of Bathon-Wye that stepped on the first loose silk thread. The Duchess of Cornty a moment after trapped the second, the two pulling in opposite directions. A few bars later, and well before any of the dancers realised what they had inadvertently done, threads were stuck to legs, and arms, and under feet, and wrapped around ceremonial swords, or between the sections of elegant fans. The waltz crescendoed to a dramatic halt, Witch feeling dizzy and breathless and suddenly rather chilly. The Baron blushed a deep crimson, his moustache quivered in the silence that followed, his eyes darting down again and again before being hauled reluctantly up like some naughty child.

And then he was clapping and “Bravo!”ing with all his might, as Witch stood in the dead centre of the majestic ballroom. The rest of the guests were soon cheering and clapping along. Only one made the mistake of whistling. His piercing note was cut abruptly short with a snap! of Witch’s fingers almost before it had begun. Fortunately for him, a quick thinking page rushed forward with a pitcher of water. The spell would probably wear off by the next day, although the effects on the cad’s moral character of spending the rest of the night in the palace moat as a trout would likely last a lifetime. With the applause refusing to die out, Witch made her stately way to the cloakroom, head held high. Own the moment, she hissed to herself.

“My cloak,” she demanded imperiously, and then repeated with the addition of a deadly glare as the attendant gaped and stuttered. She swiftly pulled the warm velvet over her goose-bumped flesh.

Always leave them wanting more, her mother, the crone, often said. Witch sorted through the cards, dropping most of them to the carriage floor.

She unfroze Spider, who, on second thoughts, decided that being frozen might actually be for the best, and so didn’t dare move. The dagger of a crimson painted fingernail approached but, instead of jabbing, Witch’s finger curled and began to softly stroke Spider’s trembling body.

“You know, Spider,” Witch mused aloud. “I think I might have to retire that particular party trick. Now, nobody will pay any attention to the dress you spin. No matter how gorgeous it is, they’ll just be waiting for it to unravel and will be most disappointed if it doesn’t. Fortunately, half a dozen of these cards are from the finest tailors and dress makers of the Kingdom, willing to give me their very best garments for free, in the hope I’ll wear them to the next Ball. I don’t suppose you’d mind, Spider, if…?”

Spider was giddy with relief, tapping out her ready assent.

“And I guess that means I won’t need you as a broach, either.”

Spider thought about that. Thought once again about all those annoying but incredibly tasty insects the bright lights and tables of finger food attracted. She began sketching out a design on Witch’s naked shoulder.

“A clutch bag? With room for a small passenger? Well, why not!”

Spider purred as she settled down to sleep on the journey home, dreaming of moths and flies and maybe even a small roach or two.

Idly, Witch turned over the card from the Baron, a little thrill sending shivers down her spine every time she re-read the words scribed on the back. Such a charming rogue!

All in all, it had been a most enchanted evening. 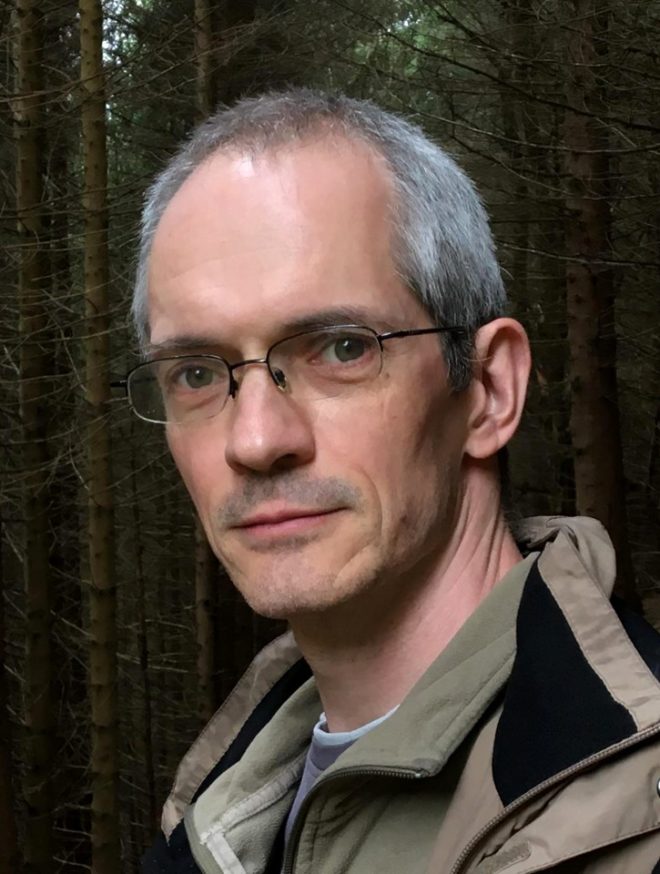 Dr Charvy Narain trained as a neuroscientist and now works to promote public engagement with science.