Good Girl was first performed as part of Escape Artists Live at PodUK 2020, and released on the EA patreon feed.

Wawa waits in the woods, tongue lolling, ears drooping. She waits in the fern-covered gully beside the dried-up creek. Every now and then she tries to lie down, but then there’ll be a rustle in the trees, the sound of snapping twigs, of scuttling claws, and she’s up again.

But no one comes.

Wawa waits. She would howl, would bark, but Wawa is a good girl. A good dog.

She isn’t sure how long she’s been waiting. If she could, she’d run back home, back to the yard, to her blanket by the bed, the ball beneath the trampoline, but she can’t. There’s something here, something she can’t leave behind. She has to wait, has to guard, that’s all she knows.

Wawa’s legs don’t feel right, neither does her nose. Everything’s muddled. But she cannot leave this patch of dirt; this shady copse.

It rains. Gets darker. Colder. Moon shivering in the puddle by her paws. Wawa does not drink. Mist rises around her, gathers close, gathers tight. Wawa breathes it in. The mist is cold and wet. It slips into her. Slips deep inside.

Someone’s coming now. The creak of dry wood beyond the ferns.

Wawa quivers, a growl held tight in her throat.

No. No growling. Wawa is a good girl. Good dog. Still, she holds on to that growl. Feels it grow in her throat, feels it drip between her teeth. Wawa breathes in the mist again. Deep and cold. It’s getting colder. Getting darker.

Wawa paces the clearing, going no further than the edges where the trees and bushes crowd in close. Footsteps stir the shadows. A glimpse of light. Wawa holds on to her growl, to the mist.

Wawa looks down. There’s a dog at her feet, in the trampled mud. A good dog, a good girl, on her side, guts spilling into the moonlit puddle, bones exposed where the knife went in. Blood.

Through the mist, Wawa sees the boy put something on the ground. Something small and soft. Something whimpering. Wawa breathes deep. Breathes in the mist until all she is, is mist and cold and darkness. Then, Wawa howls. The mist wreathes around her as she howls, as she rises, as she leaps, as her new fangs of cold and darkness close tight around the boy’s throat.

Wawa is not a good dog. She will not be a good girl anymore.

Bless Me, Father, For I Have Sinned

Theresa couldn’t stop thinking about the handsome priest she wanted to kiss, Monsignor Griffin’s murder, and the fact that she was probably, definitely, going to Hell. It wasn’t fair. Eighth grade was supposed to be easy and she tried her best, but…. She just had to survive this year. Then, she’d be fourteen and in public school. No more nuns, priests, or itchy plaid uniforms. No more religion looking over her shoulder everywhere she went. She’d be much safer. She couldn’t wait.

They’d discovered Monsignor’s mangled body in the graveyard next to the chapel. Theresa kept picturing it, his dark red blood staining the crisp white snow next to the crumbling stone cross where Moira Kelly was rotting in her grave. No one knew who did it. They were told not to worry, but oh, Theresa did.

Monsignor was replaced by Father Martin, a new priest who wanted their church to modernize, something about Vatican II. He looked like Han Solo. She couldn’t stop thinking about that. Tonight they were supposed to do confession face to face, right there in church, in the side chapel devoted to St. Francis. No more curtained box and little screened windows. They’d still have privacy there, Father Martin said. There was a separate exit that led to the graveyard, but no one ever came in that way. No one else would hear her confession. Just him. Right there. She’d have to look right into his dreamy blue eyes and tell him her sins. What was she supposed to say? He’d look right through her and see all her dark secrets, her shameful lust. She’d probably be staring at his lips the whole time.

Theresa was pretty sure she was going to Hell for all the thoughts she had, the things she did, but she couldn’t confess them out loud. She just couldn’t. She couldn’t quit confirmation classes, either. Her mom would kill her and then she’d be dead. At least it wasn’t that time of the month yet. She’d have to find some way to skip next week’s class, because she couldn’t face confession on top of feeling like that. But tonight, she was stuck.

She heard her name called and walked to the door to the right of the altar, anxiety rising, her head full of urges. She entered the chapel, and closed the door behind her. It wasn’t her fault. Father Martin was young and handsome and sitting there staring at her. She sat down, starting to hyperventilate, her skin tingling, and then she was mouthing the words, clinging to the ritual. “Bless me Father, for I have sinned….” She paused in her panic, the stress overtaking her, her thoughts overtaking her, and then she felt the wolf overtaking her even though the moon would not be full until next Thursday. Maybe the stress? Now she was all hair and teeth and she wasn’t worried about anything but her hunger, consumed by her bloodlust.

He tasted so much better than Monsignor.

She sunk her teeth into his flesh, ripping and rending and tearing in a ritual far older than the Catholic church. When she was satisfied, she pushed the door open with her nose and ran out through the graveyard, and from there to the woods. For now, the guilt was all gone. She rolled in the dirt and sang a song to the moon, urging it to come out and play. 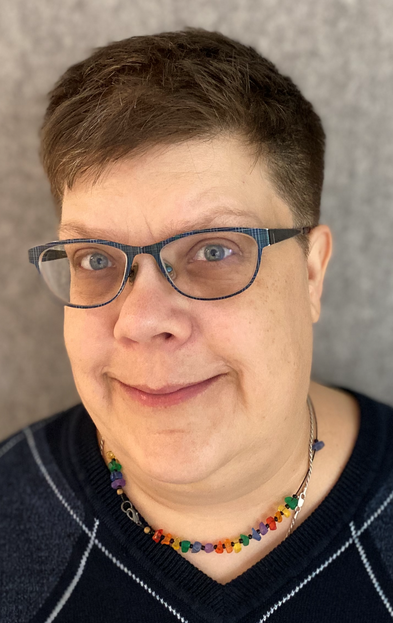 Cathy Tenzo is a writer, an artist, and a devoted seeker of joy. Her fiction has appeared in Flash Fiction Online and Double Dare Press. Her poetry has been featured in Asimov’s Science Fiction, Dreams and Nightmares, Typehouse Literary Magazine, and many more. She is a member of the Lady Poetesses from Hell, who read at science fiction conventions. She’s from New York, but now lives in Seattle where she really wishes it would rain more often. She also draws some pretty fun comics and is proud to be a member of the LGBT community. You can find her on Twitter @CathyTenzo and at CathyTenzo.com.

Maria Haskins is a Swedish-Canadian writer and translator. She writes speculative fiction and currently lives just outside Vancouver with a husband, two kids, and a very large black dog. Maria also reviews speculative short fiction for B&N’s Sci-Fi & Fantasy Blog, and on her own blog mariahaskins.com. Her work has appeared in Beneath Ceaseless Skies, Shimmer, Podcastle, PseudoPod, Escape Pod, and elsewhere.

Pippa Alice Stephens is an actress and voiceover artist. She is soon to be seen in ‘The Invisible War’ playing Rose Berkeley and ‘Spiralling’ playing Natalie.