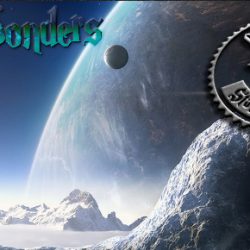 We hope you enjoy editor and host Marguerite Kenner’s favorite story from 2015, The Tale of the White Tiger by Donald Jacob Uitvlugt and narrated by Tracey Yuen. The story originally aired July 5, 2015 as Episode 168.

The Tale of the White Tiger

Blind Li Xiao surveyed the marketplace. The sensor net embedded in his storyteller’s robes fed signals directly to his brain. The citizenship transponders exactly matched the number of heat signatures. A world firmly loyal to the Empire, then. Or one too afraid to act otherwise.

A passive scan showed at least two peacekeepers in the market. Probably more secret police. He would have to be careful in his story selection. Something from one of the official chronicles. Something he could use for his own purposes.

He beat his staff on the ground three times. The bells at the head chimed out their message. Be still and hearken. Blind Li Xiao is about to begin his tale. He chanted the introductory poem in his clear, high voice: