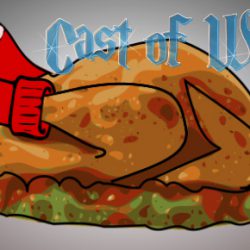 I’ve been coming to uptown for the past year since getting a new job and moving to Whittier, and somehow had never seen The Four Stewpots before. I’m actually not a stew fan. I like my food fresh. Soup is okay, some days. Stew? Bleh. It’s been sitting for ages – this place actually suggests one pot they have is a thousand years old. Bon Apetit? But my daughter’s first report card had come home from junior high – she’d done exceptionally well – she wants to be an astronaut, a monster make-up artist, a superhero, a cryptozoologist, or a cartographer of parallel universes – whatever she decides to do she’ll be brilliant, and so as a reward, I let her pick. She saw The Four Stewpots as we were driving down the street, right next to Undercity Comics, and demanded we go there. Again, I do not like stew, but I am a supportive and proud mother who wants to encourage my daughter’s academic achievements, and realize that it isn’t always about me. At least, until it’s time to write the Yelp review.

It is time to write the Yelp review.

END_OF_DOCUMENT_TOKEN_TO_BE_REPLACED

by Daniel and Mary E. Lowd

Topher checked his watch and peeked out around the dusky red stage curtain.  There was a full house in the bar tonight. If he played them right he could get all the tips he needed, and tonight could be the greatest night of his life.  He put a paw to his face, pulled down on his tawny-furred jowls, and drew a deep breath. “Okay,” he said, softly to himself. “Let’s go.”

The spotlight hit Topher before he reached the mike, but he was used to that bright glare in his eyes.  He straightened his jacket and stared the audience down before he began, giving them his best tough guy look.  He had the mug for it, if not the build. “I don’t get no respect,” Topher barked at the audience. “It’s because I’m short.  Curse of my breed, you know?”