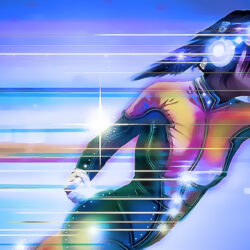 Wind Settles in the Bones

Syn hated pre-race press conferences. Instead of mentally preparing for competition, she had to smile and answer every media outlet’s repetitive questions. Timm Yancy with One AU especially frustrated her. He unfailingly asked inane human-interest questions like “what did you have for breakfast this morning?” (a magnetocarbonate shake so she could sense magnetic fields, followed by protein-rich cricket bars for the nausea, same as every race day) and “is that a new haircut?” (as if it would be seen under her spacesuit helmet). But Syn hadn’t become the third-ranked solar wind racer by putting off unpleasant tasks, so she called on him first. And that was how Syn learned that her dad had died.

Syn’s teeth ached and her ears hummed from the cameras floating in front of her. Their magnetic fields were a hundred times stronger than the solar wind’s, and the magnetocarbonate made her bones thrum like bass strings plucked too hard. Then Syn realized how long she’d been silent, gaping at Timm. Her media training took over. She offered a sad smile calibrated just so. “It’s hard, but I know he’d want me to focus on the race.” END_OF_DOCUMENT_TOKEN_TO_BE_REPLACED