The trouble began when Rhys found the oak wardrobe. He stood barely four feet tall, but the free standing closet was twice that high. Its hinges were beaten brass turned brown with age. The carved wood was riddled with little worm holes. Rhys had never seen a piece of furniture so big and heavy, and he knew that if it fell on him he’d be squashed.

The wardrobe rested in a corner of a large, open attic. The attic was a jumble clutter of his grandfather’s collection of magic equipment. His grandfather had been a professional magician who had starred in New York and Paris and even Moscow.

The key to the armoire doors stuck out of the lock. It turned with a dry rasp. When Rhys opened the doors piles of theater costumes, tablecloths and curtains spilled out onto the floor. Their colors, once shocking bright purples and pinks, had faded over time into pastels.

I’m in trouble, Rhys thought. He pulled out the rest of the clothes so he could restack them and try and shut the doors. Under the cloth worms had eaten through one of the base boards. Beneath the rotted board he could see the shape of a box.

END_OF_DOCUMENT_TOKEN_TO_BE_REPLACED 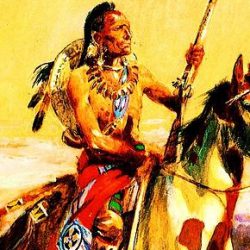 This is a substantially rewritten version of “The Dun Horse.” This tale was collected on the Pawnee reservation by George Bird Grinnel and published in 1889 in his book titled “Pawnee Hero stories and Folk Tales.”

“It is good and it is time. Already the old things are being lost, and those who knew the secrets are many of them dead. If we had known how to write we would have put these things down and they would not have been forgotten. But we could not write and these stories were handed down from one to another. The old men told their grandchildren and so the secrets and the stories and the doings of long ago have been handed down. It may be that they have changed as they passed from father to son, and it is well that they should be put down so that our children, when they are like the white people, can know what were their fathers’ ways.

This is my homage to “The Dun Horse.” I hope you like it too.  ~EWA

Long ago in the Pawnee tribe there lived an old woman and her grandson, a boy of sixteen. These two had no living relatives in the tribe and were very poor. The rest of the tribe despised them for having nothing, not even family.

The old woman and the boy always stayed behind when the tribe moved to new hunting grounds so they could search through the trash of the abandoned camp for things the other Pawnees had thrown away- shreds of buffalo robes, worn-out moccasins with holes in them and chunks of old bone and gristle.

One day as the old woman and her grandson followed behind on the trail of their tribe, they walked up to an old, bony dun horse which had been left to die by another band of Indians.
END_OF_DOCUMENT_TOKEN_TO_BE_REPLACED