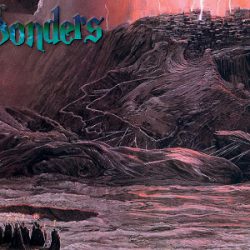 Ida spat dirt from her mouth as she rode her weevil through the dust cloud churned up by the drove. These were healthy potatoes, Maris-Charlotte cross breeds, not a hint of blight on their creamy brown skins, none of them with a circumference less than three feet. Good rolling stock too, each one amply rounded so that their tumble was sufficiently smooth and uninterrupted, allowing them to gather a swift forward momentum.

There had to be at least four hundred head. They were feral and stubborn – not used to human contact. Managing them was going to be a challenging prospect, however, with Ida’s father and most the more experienced drovers felled by influenza it was imperative that she tried. A drove this size could make all the difference. If the potatoes could be enticed to settle in the three-acre field that had been cultivated in anticipation of their arrival there would be sufficient food to see her community through the winter.

Astride the speckled shell of her weevil, Ida maintained her position centre back of the rolling, tumbling drove, eyes constantly peering through the dust for signs of any attempted break away by rogue potatoes. She could see that her crew, most of them inexperienced teenagers like herself, were tired, but she knew she couldn’t afford to slow the pace – at least not until they were within sight of the settlement.

This expedition had originally been her father’s idea.
END_OF_DOCUMENT_TOKEN_TO_BE_REPLACED