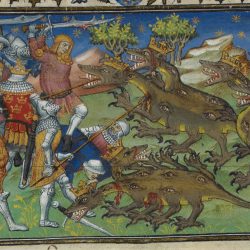 One by one the knights claimed their squires and I watched my companions go to their new lives, eyes bright with the glory they would win. I stood with eyes half-closed against the fear that I would be left. I, Cori Forsmire, from one of Duke Amlick’s oldest houses, would have to sell my sword as a common guard. What was I going to tell my father? END_OF_DOCUMENT_TOKEN_TO_BE_REPLACED