They want me to give your letters to the International Museum for safekeeping. They say the letters need to be preserved and the sooner the better.

They say that the things you did will echo through our history and serve as an inspiration for future generations.

But why should I care about future generations? We agreed that we’d never have children, remember? When we first got together, you said you were too old for midnight feedings and I said I was too broken to be a mother—both flimsy half-truths.

They sent the museum’s chief curator to the house this morning, to make the request in person. She wore a navy blazer and pearls. She showed me pamphlets about preservation methods. She explained the difference between cotton fibres, wood pulp and rates of deterioration. She talked about humidity, oxidation and the shame of losing something so precious. She said it would be much easier if you had used electronic files and a standard tablet.

“But there’s charm in being so old-fashioned,” she quickly assured me, careful not to offend. She cleared her throat awkwardly, while adjusting her string of pearls.

I nodded along blankly, setting the pamphlets aside. I asked if she wanted some tea.

“Yes, thank you,” she answered, with a thin smile.

I put the kettle on and retrieved the tea bags, trying not to stare into the cupboards for too long.

“People love your husband’s story. It’s so inspiring,” the curator insisted, once I rejoined her at the table. She’d been told I was reluctant to turn over the letters, so she was treading lightly. “We’ll censor the more sentimental comments, of course. We plan to install a plaque with the main exhibit that will summarize everything that happened. The mission to Isa-6, the regrettable actions of the first crew, the threats and tension that followed, and the long, slogging negotiations for peace undertaken by your husband afterwards.”

She wondered, too curious, “In his letters, does he describe the planet? Smells, sounds, sights?”

“He wrote about some of it,” I confirmed, trying not to flinch at her barely suppressed excitement. My pain was personal. Her interest was universal. No one will ever step foot on Isa-6 again. You were the first and last human to breathe that alien air. They’ve concluded that you received a lethal dose of exposure in the first 72 hours. Your body then slowly turned on itself, breaking down over the next four years. I didn’t need them to tell me that. I added, “He told me he didn’t like the nights. They were cold and very dark. Isa-6 has no moons and the distance from other stars is considerable.”

“And the native inhabitants?” the curator asked. She attempted to keep her voice level but her pen scribbled notes furiously and her tea remained untouched. “Does he describe their lifestyles? Their culture? The way they perceived us after the, um…regrettable events of the first meeting?”

“Yes,” I nodded again, to make her happy, although I honestly couldn’t remember.

I never wanted your letters. Or to find out the secrets of an alien planet. I just wanted you. Do you remember the stack you delivered yourself? Right before the Armistice, when the council on Isa-6 sent you back to deliver the final terms in person? You’d tied the letters up in white ribbons.

That was your last trip home. You had a cough you couldn’t shake and you were hiding the blood stains on your handkerchief from me. Not well. But I was too busy running my fingers through your hair and stealing kisses from your lips to waste time confronting you.

“And his…sacrifice,” she gave the word heavy reverence. “Did he know that staying on Isa-6 would kill him? That volunteering in the first place was a death sentence?”

“He did,” I replied. And if you think I didn’t know too, even at the beginning, you were a fool. Your eyes always gave you away so easily. Especially when they were looking at me.

“He prevented a war,” the curator reached out, covering my hand with her own. “He saved millions of lives. We’re all so grateful.”

I resisted the urge to pull my hand away. I couldn’t trust her sympathy. She wanted my letters. To preserve lines that read, “the acid waters shine with a metallic gleam.” To hide lines that read, “The only thing I’ll regret is leaving you alone.”

If only for the sake of future generations…

The back door suddenly opened wide, banging against the door jamb loudly. Little footsteps followed. I couldn’t suppress my grin, as a small girl came running into the kitchen, with twigs and autumn leaves in her braids and some new treasure in her hands, “Mama, Mama! Look what I found…”

“Show me, Anna,” I beckoned her near, lifting the five-year-old into my lap to inspect the milkweed floss cradled in her tiny hands.

Our daughter has your eyes. She was your last love letter, arriving only a few weeks after the others—the ones they handed to me with a folded flag and muttered condolences. She’s the only one the museum doesn’t want. The only one I’ll never give up.

Your death broke me, but she made me whole.

The curator watched us as we picked at the white threads and brown seeds together, waiting, hoping. She was eager, but knew better than to ask again.

“Yes,” I hugged Anna close as I made the decision. My teacup was empty and the curator’s had gone cold. “You can have the letters.” 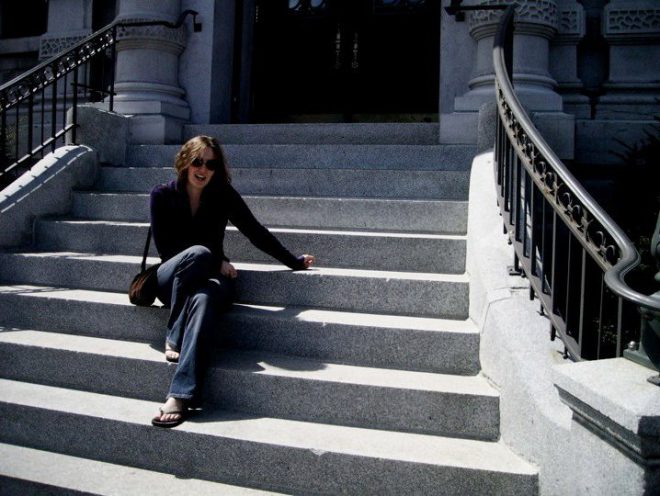 Gretchen Tessmer is a writer based in the US/Canadian borderlands of Northern New York. She writes both poetry and short fiction, with work appearing in Nature, Daily Science Fiction and Strange Horizons, among other venues.