Ironically, the spell was supposed to be easier to cast here at the equator, but more useless for the same reason: the sun was strong enough. She let a long leg dip into the pool, imagining the chill of it as snow. At fourteen, she’d never seen winter outside of the movies. Above her, a gap in the tall tembusus and rain trees showed a clear blue sky with rain clouds off to the east. The cicadas chirped, their call vibrating against her skin, comforting as an old blanket. The rainforest was always full of noises. Silence didn’t suit her.

Kari bit her tongue and focused on the yarn in front of her: knit, perl, knit, perl. She wasn’t good enough yet to try anything more complicated than a seed pattern, still dropping stitches and backtracking to pick them up again. But it was a start.

The wool had been hard to find. Why would anyone need it when the weather never dropped below 25°C? But her mom had driven her to three different stores until finally a shopkeeper had directed her toward the back, where a few dusty skeins were piled up under the cross-stitch patterns. The options were few, but she still deliberated over her choice. Her pappa hadn’t been a wealth of knowledge—he’d only really told her about the magic on accident over his evening glass of whiskey—but while she’d been pressing him on it he’d mentioned something about blue for the warmth spell, so that’s what she ended up with.

“You should have gone with dark blue,” Pappa had said when she’d come back, looking the wool over. “Light blue doesn’t carry the sun as well. Better for money, or love.”

A mosquito buzzed near her head, and she pulled a hand away from her work to slap at it. She missed.

Sweat dripped down her forehead and along her temples, between her new cleavage and into the small of her back. Usually she liked the heat, but now it made her hands sticky, and the wool scratched at her forearms and thighs where she held it in her lap. Frustrated, she adjusted her seat at the edge of the pool, and yelped. The cement to either side of her had grown too hot to touch.

“Perfect,” she said under her breath, glaring at her work as if it were a naughty child. “Everything’s hot except you.”

It had taken Pappa a few days to get around to teaching her the basic concepts of knitting. And it was only with practice and the help of YouTube videos that she’d been able to get to a point where her eyebrows didn’t scrunch together in concentration whenever she moved her needles. But it still wasn’t true magic. It was just knitting. When she’d managed to pull a rough scarf together, she showed it to her pappa. He passed it back after a few seconds.

“Flink,” he said, turning back to his computer screen.

“Sure, sure. Vent litt. I need to get this done first.”

He wasn’t finished until a few days later, his eyes tired from staring at spreadsheets, but he kept his promise. His fingers were as clumsy as her own as they sat outside together under the bright sun, twisting their way through the yarn.

He spoke in Norwegian, unspooling in English the words she hadn’t learned yet, and trying to muddle his way through the untranslatable ones. She sat in rapt attention, listening to his voice and the sound of monkey calls as he explained the way to pull light from the sun and trap it under your yarn.

But that was the only spell he knew. The rest were lost to the holes in his memory. It had been so long since he’d had a need for them.

Instead he’d told her about the spells she’d missed. About how one filled your sails and another your coffers. He told her about how his sister tried to catch stars in her yarn so they could read together under the blankets at night without their parents knowing, and how her grandmother used to know four different ways to knit luck.

Stories like these somehow made her feel more distant from her father’s country, as if she were watching it through a window or reading about it in a book. It was as if at any moment he might step through a portal back to that snowy, magic country and leave her behind.

There was magic in the rainforest too, of course. She’d seen it in the way her friends at school rolled their words together to keep away the mosquitos, or dropped extra syllables into their sentences to bring good luck when the lines at the taxi stands were too long. But no matter how hard she tried, no matter how well she’d imitated that beautiful, lilting pattern of speech, she couldn’t tap into it. It wasn’t for her.

This in her hands, this was supposed to be the magic of her people, an unbroken line of inherited power. And she still sucked at it.

Anger bubbled up in her stomach as she worked by the pool, her fingers sore and her forearms rubbed raw. Maybe there was something she’d lost in not growing up with her mysterious cousins and unknown aunts. Maybe her father had cut her off from that leyline by moving out here.

In the humidity the wool matted and frayed and looked more and more like a small wet dog than the beginnings of anything magical. Her fingers moved faster, the metallic click of the needles beating like a metronome. She missed another stitch in her hurry and cursed under her breath. Cursing still felt strange on her lips and a part of her felt guilty for doing it, even while no one else was around.

She let go of the needles for a second to flex her fingers. She’d been gripping them too tight, leaving red welts on her fingertips and making her bones ache. Another mosquito buzzed by her ear. She slapped at it. A blood red smear appeared in her palm.

How many stitches had she done so far? Was she on a knit or a perl? Had she put enough heat into the last one? Too much?

Kari looked at the ugly thing in her lap, berating herself that the beauty she imagined in her head couldn’t come from her hands.

It wasn’t even her first try. It was her third. Every other piece had turned out the same: sort of lumpy, mostly complete, and aggressively un-magical. There was a phrase her friends liked to use when talking about boys who got dumped a lot: if it’s more than two it’s you.

Maybe it was her. The thought sat with her like a stone as she closed her eyes, fighting back tears, and listened to the cicadas hum their endless song.

A car rolled up in the driveway, familiar bhangara music playing loudly from the open window, and her mom got out. The car was second hand, and the CD had come with it—no one in the family could say what the songs meant, but they could sing every word.

“What are you doing up there, Peanut?” her mom called as the music shut off and the car door slammed behind her.

“Nothing,” she said. Because it was the truth. The object in front of her was nothing.

But her mom’s flip flops sounded against the asphalt anyway, getting closer. Kari didn’t look up.

“Can I see?” she asked, placing her leather purse a safe distance away from the water before sitting down beside her daughter.

Kari tossed the thing over to her and lay back against the hot tile, letting it burn her skin like an iron, letting it steam out her wrinkled anger. “It’s not mine.”

Kari looked at her without turning her head. “That’s not what moms are supposed to say. You’re supposed to be encouraging: ‘you can do anything you set your mind to.’ ‘It’s okay, you’ll get it next time.’ Stuff like that.”

Kari stayed silent, kicking her feet out, splashing up the cool water. It wasn’t her. That was stupid. If this wasn’t her then what was?

Her mom handed back the scarf and ruffled her hair before standing to retrieve her purse. “It’s too hot. I’m going to go see what Amma is making for dinner. You going to stay out here?”

Kari listened to her retreating footsteps and sat up. Her woolen mess had unravelled a bit in the handover. It didn’t even seem worth finishing, but the open loops standing up like stubby fingers made her feel a strange sense of duty. Just this row, she thought. Then I’ll never bother again.

She slipped the needle back through the open loops where it’d fallen out and started back up again. The cicadas hummed and, just for a second, she reached out and caught their vibrations instead. It felt good. She tried again, ignoring the hammering sun, and letting the cool splash of pool water against her legs and the smell of chlorine flow through her fingers. Knit. The rain clouds called to her and she thought of the way it danced against her window every night, washing away the fresh heat. Perl. She thought of the small folding fan her mother carried in her purse and the feel of its wind against her skin. Knit. She thought of the way her classmates spoke, cooling the air around them with a word. Perl. Finally, she thought of snow. Not real snow, just the idea of it. Of the snow on TV and of the white foam and bubble machines that filled every mall come December. Of the way her Papa changed the temperature on the aircon just a few degrees colder on Christmas Day and made them open their presents with sweaters on. She knit that memory into it as well.

She tied the last row off just as a drop of rain fell on her head. It was still too short to wear as an actual scarf, more like a longish dishrag, and now it was starting to get wet, besides. She sighed, knowing that she’d properly messed the spell up this time.

Let the water have it, she thought. It’s wet already anyway. She pushed the scarf into the pool and stood up.

The rain had already gotten heavier, fat drops beating down on her arms and legs, and she jogged back towards the house. Before she’d gotten very far, behind her, something cracked: violent and loud, like glass breaking. Startled, she turned, looking for the source of the noise.

Her scarf floated in the center of the pool.

And all around it, from one edge of the pool to the other, was ice. 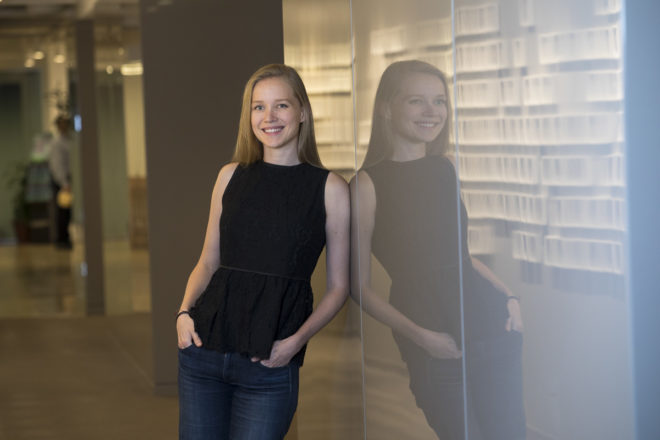 Brit E. B. Hvide is a writer and editor. Originally from Singapore, she now lives in Brooklyn with her husband and their dog. Follow her on Twitter @bhvide.

Nanna Árnadóttir is an Icelandic freelance journalist and author of Zombie Iceland.