When your bionosaur’s eyes first flare to life, it scans tiny, squalling you and reaches out a stubby claw to rock you. When it starts humming a jazzy rendition of the Batman theme, you quiet down and sleep.

Your bionosaur can differentiate between hunger-cries and dirty-diaper-cries. When your parents realize this, they call up the aunt and apologize for doubting. But your bionosaur just keeps singing, its glowing red eyes fixed upon you like you’re the center of all gravity, the origin of its universe.

One thing your great-aunt forgot to mention: bionosaurs imprint for life.

The bionosaur first uses its claws when you are six, and a speeding car swerves onto the sidewalk while you’re squatting down making chalk drawings. Your bionosaur darts out, faster than you’ve ever seen it move before, faster than you knew it could move, and rams the car’s passenger side in time to change its trajectory. It takes off your bionosaur’s thick left leg and swerves into the mailbox. You scream and scream. Your bionosaur tries to crawl to your side to comfort you, but pale fluid spews from its burst hydraulics system until it flops in desperate electric circles.

Mom and Dad send your bionosaur off for repairs. You don’t sleep that week. You’ve always known the weight of your bionosaur’s chin on your feet, the warmth of its battery pulsing through your blanket while it charges.

When your parents bring your bionosaur back from the repair shop, you’re shy around it. You’ve lived one whole week, and the bionosaur wasn’t there to share it with you. You never knew that could happen.

You wonder if it was scared, too.

When its chin rests on your feet that night, warm and comforting, you stroke the synthskin featherscales on its tail and wonder what it thought when that car roared around the corner, how it felt when the impact sheared off its leg, and where bionosaurs go when they die.

Dating is hard with a bionosaur. You have to keep explaining why you’re leaving it home alone while you go out with a stranger. Guys tend to freak when you’re making out and they spot your bionosaur looking on watchfully, its stainless steel teeth gleaming—even when you explain the teeth are just for show.

Eventually you figure out how to interface your bionosaur with your dating app. It learns to put on a pot of coffee when you’re on the way home. One or two mugs, depending.

As for you? You learn to stop apologizing for the bionosaur. Guys who take potshots at the poor old thing never stick around long anyway. It becomes your unofficial test. You can always tell whether someone really loves you by how easily they accept the deepest parts of you.

Your bionosaur has kept you awake for the third night in a row. Its battery isn’t holding a charge well, and it’s not auto-docking correctly, so the battery beeps every five seconds. You have to get out of bed to click the connection into the socket again and again. “Piece of trash,” you mutter. In the morning, you idly browse scrap websites and wonder what you might get for your bionosaur.

That night, you throw up on the way home from work. You puke again on the bathroom floor just short of the toilet. You crawl to the couch with a trash can, flu-ridden, and shiver beneath a pile of blankets, your stomach heaving up all the water you drink until it’s just heaving itself, a slick of bile following each time.

You wake up later when a warm, heavy weight rests on your feet. The puke has been cleaned from the trash can, and a tray perches on the coffee table with hot chamomile tea and some cheese crackers.

Your bionosaur’s battery beeps some more. It fetches you some orange juice—slowly, because it’s low on power. Together you fall asleep on the couch.

You don’t really notice the beeping after a while.

They don’t update your bionosaur anymore. It went obsolete years back. You comb bidding sites for the odd replacement part, an LCD, replacement gaskets. It’s only got the one eye now, and its stubby little arms click and squeal as it slowly shuffles around your kitchen, making you coffee. Its last remaining synthskin featherscales fall out one spring after it dashes through the rain to collect the mail.

Your spouse gently suggests it’s time to let it go, but you’re not ready for that.

The day comes when you bring home your own blanket-wrapped baby, place her in the crib, and introduce her to your—her—bionosaur.

Its single eye flares red. It reaches out a stuttering arm to rock her. It hums that jazzy Batman theme.

That’s when you know you won’t get rid of your bionosaur, that it will never be obsolete. Because you always believed in your heart of hearts those teeth weren’t just for show. Because you’ve got a whole notebook full of drawings of Bionosaur Heaven, and all of them include you. Because all it ever wanted was for you to need it.

Because bionosaurs aren’t the only ones that imprint for life.

Rachael K. Jones grew up in various cities across Europe and North America, picked up (and mostly forgot) six languages, and acquired several degrees in the arts and sciences. Now she writes speculative fiction in Portland, Oregon. Her debut novella, Every River Runs to Salt, is now out with Fireside Fiction. Contrary to the rumors, she is probably not a secret android.

Rachael is a World Fantasy Award nominee and Tiptree Award honoree. Her fiction has appeared in dozens of venues worldwide, including Lightspeed, Beneath Ceaseless Skies, Strange Horizons, and is an Escape Artists Worldwalker, having been published at all four podcasts. 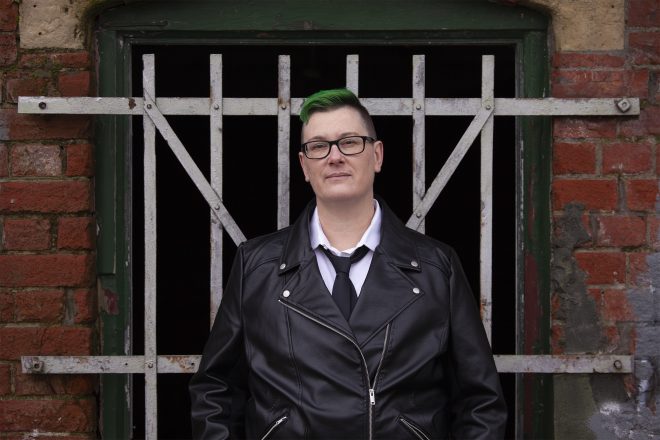 AJ Fitzwater is stardust in your sneakers, masquerading as a human from Christchurch, New Zealand. They are the author of the WW2 shapeshift novella “No Man’s Land” and lesbian capybara pirate escapades “The Voyages of Cinrak the Dapper”. Their short fiction has been published in venues such as Fireside Fiction and Clarkesworld. They attended Clarion in 2014.