“I can’t,” Sophie sulked. “I stayed out past curfew last week and I’m not allowed to go out.”

“But the gnome army marches onward!” cried Aithne, flitting in circles within Sophie’s window frame, her glowing wings a hummingbird-like blur. “The pixie tribes need our human champion to bring forth the magic. We must triumph!”

The last time, they were battling the brownies. Before that, the sprites. The clans of the otherworld were always in conflict, it seemed. It began when Sophie was 10, after she’d rescued the pixies by accidentally stepping on some goblins’ toadstool armory.

After that, at nearly every full moon, Sophie would be summoned by the pixies, sometimes in the wee hours of the morning. She’d climb out her bedroom window and be led to a park or nearby wood to confront sprites or elves or goblins. Most times, she just had to use her size to frighten off their opponents. It worked, so the pixies believed humans had magic. Sophie had believed that too, at first.

“If I get caught leaving the house, I won’t be able to go to my friend’s party this weekend,” Sophie explained.

“This party is more important than the future of the pixie people?” Aithne squeaked, her voice rising higher than it already was.

It was important to Sophie—Cute Brian from freshman geometry was going to be there. She looked toward her bedroom door. “Maybe if I tried to explain to my mom…?”

The pixie swooped into Sophie’s room, hovering just inches from her face. “You know that grown humans do not believe in our world,” she said, pointing her tiny finger. “They cannot. Your mother will deem you untruthful. Or not right in your mind. Come—my people await!”

Sophie peered out the window and wondered if she was still small enough to climb down without being heard.

“I have found a champion!” another pixie exclaimed, zipping up to her window. Sophie had met him during the sprite conflict, but now she couldn’t remember his name. “And she brings with her a feline familiar!”

He gestured toward the sidewalk. Sophie looked out to see Kaniya, her nine-year-old neighbor and occasional babysitting gig, holding her fat yellow cat, French Fry. A halo of pixies fluttered about her, their light glinting off Kaniya’s black braids as the awestruck girl stared.

“I know her,” Sophie said, remembering the wondrous feeling of her own first encounter with the pixies. “She will be a fitting champion.”

Aithne flitted out the window, pausing to look back at Sophie. “We thank you for your service.” Sophie watched as the pixie vanished into the night.

“Dinner’s ready.” Sophie turned to see her mother in her doorway. “Close that—you’re letting out the AC.”

Sophie glanced over her shoulder and saw the warm breeze flutter her curtains. “Huh. That’s weird. I don’t even remember opening that.”

She shrugged, then closed the window and went down for dinner.

Doctor, thanks for coming to see me and my son. I know things look bleak for him. I know what you said after the surgery. That you wish you could save Ben. That you did everything you could.

Could you sit with me for a bit? It’s a lot to ask. You must be tired, ready to go home. I just… need someone.

All day, I’ve been sitting here by his bedside, useless. Holding his hand. Wishing I could pray.

I don’t usually pray. Not really a believer.

Do you mind if I hold your hand? It helps.

Did you know that I saved Ben’s life once, about twenty years ago? I’ve never told anyone about that.

He was ten when the truck hit him. Crossing the street. Didn’t look. Neither did the truck driver. I saw the whole thing. Steel and chrome, all that weight. My son, torn apart.

Afterward, the doctors said he wouldn’t make it. Just like you told me today when he was brought in after that head-on collision. I sat by his bedside then too. My mom sat beside me just like you do now. Holding my hand.

I didn’t believe in prayer, but mom did.

“Melissa, you have to pray,” she told me. “Pray to God and he might save Ben.”

I wanted to scream at her. Wanted to tell her that God is useless. I mean, if there’s a God, why didn’t he just stop the truck in the first place? But I didn’t say that. Instead, I held her hand while she prayed.

I looked at Ben’s face. At the tubes and wires. At the screen that showed his life as blips and graphs and numbers. Mom was crying and praying. I didn’t cry. I was just angry and hurting, but finally, I closed my eyes and tried to say something. Something that would make a difference. Like I’m doing now. It wasn’t much of a prayer, really. The only words I could think of were “let him live”. I thought those words over and over again, like a mantra or a spell. Must have said them a thousand times.

And then, I felt it. Life. My mom’s life. I felt it. It was like a spool of thread inside her, like I was holding the end of that thread in my hand. In my other hand I felt Ben’s life, and that spool was empty, just like it is now. Sitting there, with all my pain and rage burning through me like hellfire, I felt the thread move as I unspooled my mother’s life and let it run through me, into Ben.

I’d never done anything like that before, never dared to try it ever again afterward. Until today.

By the time Ben opened his eyes, mom was dead. I let go of her hand just like I’m letting go of your hand now. There. That’s better.

You see, doctor? You were able to save Ben, after all.

Things from Long Ago

A long time ago, I lived next to a girl who could remember forgotten things. We were the same age, rode the same bus, and went to the same school. Her demeanor, like her name, was somehow too old for her age, scrawny, fading away, all but forgotten. Like a girl in a Victorian photograph, she never smiled.

“Your math worksheet,” she whispered.

“You’ve forgotten it.” I opened my backpack and found the crumpled worksheet underneath my social studies text.

“Thanks,” I said and smiled. She didn’t smile back.

She was nice to me, so I invited her over. Sitting on the swings, rocking back and forth, I learned that Maud could remember where I last put my key, my piano teacher’s phone number, that word on the tip of my tongue.

“A superpower,” I said. Maud looked toward her house, tears in her eyes.

Our social studies teacher, Miss Fitz, assigned us volunteer work for extra credit. To the groans of the rest of the class, I found the perfect activity and signed both Maud and my names next to it. Because of missed days and missed homework, Maud could use the extra credit.

It lied to get Maud out of the house. I can’t remember what I said, just her slowly riding her bike behind me. When we got to the retirement home, Maud refused to go in.

“It’s too loud,” she whispered.

“Trust me,” I said, gently taking her hand and leading her in.

The home was airy and well-lit, not nearly as gloomy as I had imagined. We went through the halls, Maud whispering all of the forgotten things in my ear. I stopped by a woman staring out of the window. “Wait here,” I told Maud and left. I returned with a bunch of small violet flowers from the garden.

“Go ahead,” I said, pressing the flowers into Maud‘s hand. “Tell her what you heard.”

Maud drifted ghost-like across the floor and presented the flowers to the woman.

“Here,” said Maud. “He smelled like these.” She motioned toward her nose. The woman took the flowers. She hesitated for a second, confused, and then held them under her nose, drawing in a breath. She blinked a couple time and looked in to the distance.

Finally, she took Maud’s hand, smiled and said, “Thank you.”

Maud — the girl who never smiled — smiled back. 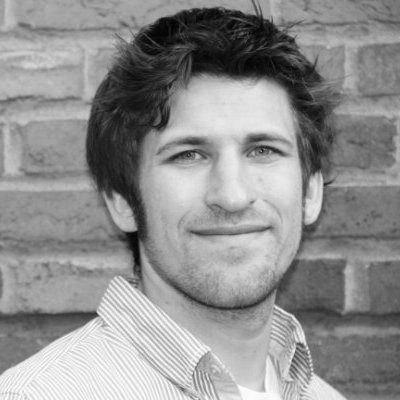 Nathan is a medical writer and editor who lives near Hanover, Germany. In his free time, he writes fiction. His stories have been published by Shoreline of Infinity, Gallery of Curiosities and Triangulation: Harmony & Dissonance. You can find out more about his stories by visiting his website, www.nathansusnik.wordpress.com, or following him on Twitter, @NathanSusnik. 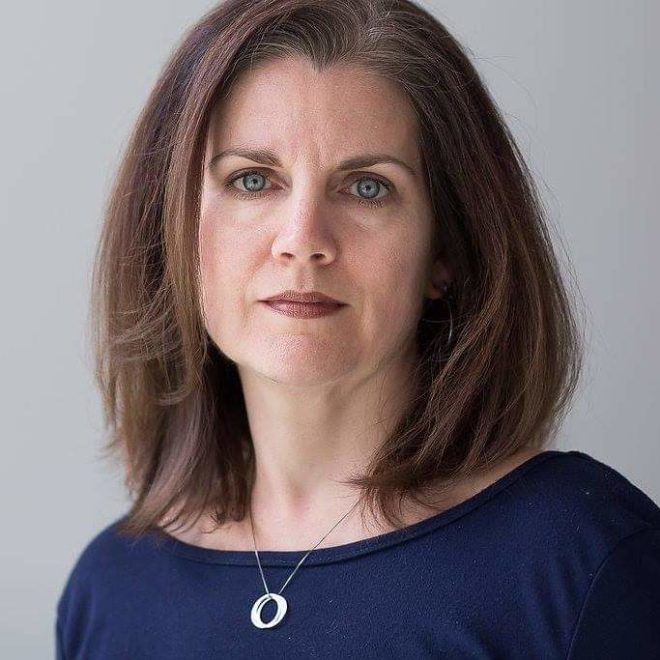 J. T. Nilson is a writer, editor, and mediocre figure skater living in the Chicago area. While she has spent years publishing nonfiction, her first fiction publication will soon appear in Parsec Ink’s upcoming anthology Triangulation: Harmony and Dissonance.

Maria Haskins is a Swedish-Canadian writer and translator. She writes speculative fiction and currently lives just outside Vancouver with a husband, two kids, and a very large black dog. Maria also reviews speculative short fiction for B&N’s Sci-Fi & Fantasy Blog, and on her own blog mariahaskins.com. Her work has appeared in Beneath Ceaseless Skies, Shimmer, Podcastle, PseudoPod, Escape Pod, and elsewhere. 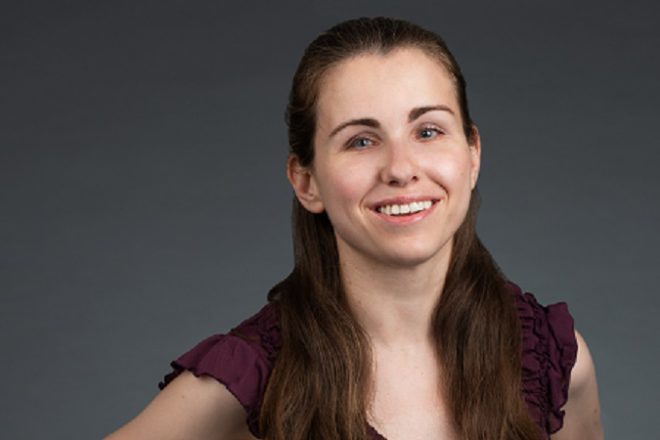 Voice acting has been my passion ever since I can remember! I bring my truth and sincerity to each role. Acting allows me to freely express myself and put voices to diverse/complex characters. Recording stories on my tape player was a large pastime in my childhood; I also improved stories for fun with a friend as a teen (to stretch my imagination’s muscles.)

Now-a-days I get behind the microphone to voice characters for radio dramas, adds, commercials, stories, museum exhibits and games from home. Working with various producers for the past decade has allowed me to meet so many creative friends and coworkers.

My affirmation before each recording session is: It’s not just the voice that matters; it’s how you tell the story 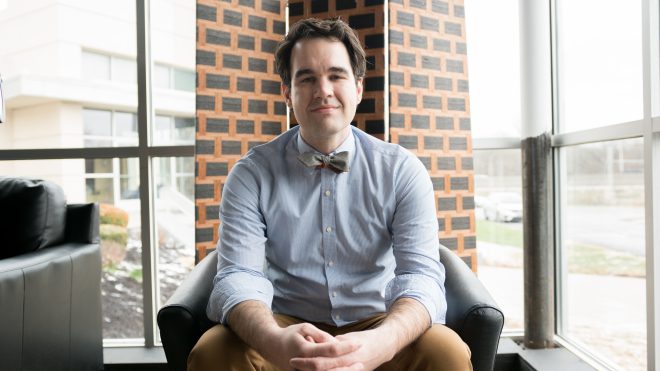 Kyle Akers is a voice actor from Kansas City, Missouri. He has contributed to podcasts like Pseudopod, Chilling Tales for Dark Nights, and NoSleepPodcast. He also produces and performs in his own improv podcast called “The Counselor.” Prior to voice acting, Kyle toured the country as a professional musician, singing and playing bass guitar for the electro-pop band Antennas Up, which enjoyed success through several national television show placements and commercials. Since then, Kyle has dabbled in long-form improv and audio production while performing weekend gigs with Kansas City cover band The Magnetics. 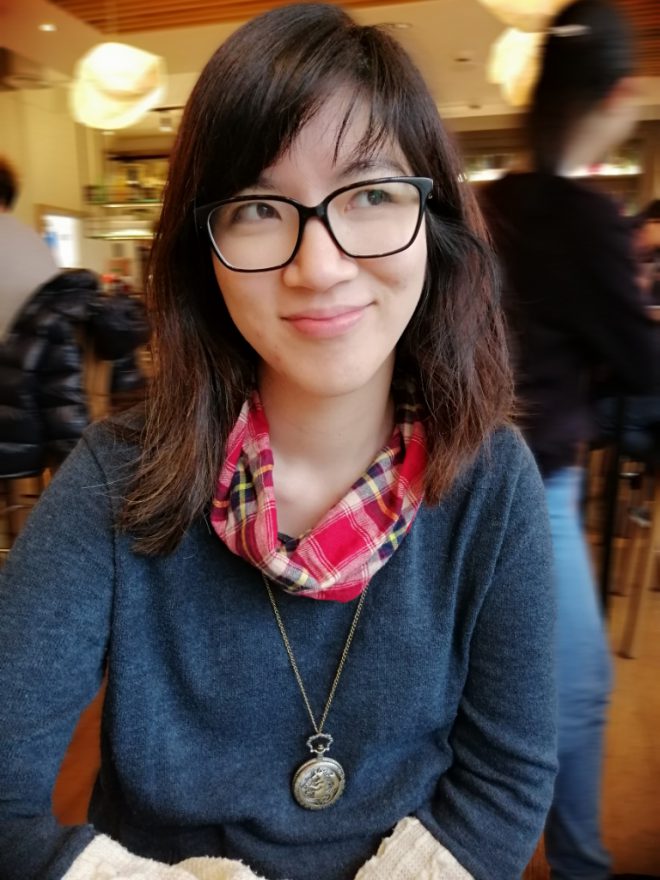 Eliza Chan is a writer and occasional narrator of speculative fiction. She has narrated for Pseudopod, Podcastle and Cast of Wonders. It amuses her endlessly that people find her Scottish accent soothing. Eliza has had her own work featured in The Dark, Podcastle, Fantasy Magazine and The Best of British Fantasy 2019.

When not working on her current novel or reading, Eliza can be found boardgaming, watching anime, baby wrangling and dabbling in crafts. You can find out more at her website www.elizachan.co.uk or on twitter @elizawchan.