The Bibliopothecary was writing out the contraindications on the labels for the dystopian sci-fi when Gretchen stepped up to the counter on her first visit.

“Do not consume a second title in this genre less than three days after finishing,” the Bibliopothecary wrote in swooping black letters. “Do not take Orwell with Huxley. Recommended consume one work of optimistic space opera to alleviate possible side effects of hopelessness and fear of the future.” Gretchen waited for the Bibliopothecary to finish before clearing her throat.

The Bibliopothecary peered at Gretchen through red cat’s eye glasses. “What do you need?”

The Bibliopothecary’s eyes narrowed. “Hm. What about?”

“Nothing in particular,” said Gretchen.

“Ah. So, everything, then,” the Bibliopothecary said, nodding. “Been a lot of that going around, lately.”

Gretchen shrugged and avoided looking at the newspaper and magazine racks. “My friend recommended a dose of Wodehouse, do I need a prescription for that?”

The Bibliopothecary shook her head. “For some of the bigger anthologies, maybe, but all of the smaller collections are over the counter. Aisle three, ma’am.”

Gretchen collected her book. “Take with good tea, preferably with sugar and cream, twice a day or as needed, until symptoms subside,” the Bibliopothecary said as she was ringing Gretchen through. “Breathe the book in first, it increases the effectiveness. Try to read by a sunny window.”

Gretchen nodded, clutching the book and its dosage instructions to her chest as she walked out.

The Bibliopothecary was dealing with an older couple arguing over a stack of colourful paperbacks when Gretchen came in on her second visit.

“I don’t want to read this PC bullshit…” the husband complained, glowering at an anthology of Malaysian fantasy.

His wife tutted him. “Now Howard, you know it’s not forever. The doctor just wants you on this reading diet for six months. Heinlein will still be there.”

The wife threw her hands up in exasperation. “You’ve read all his books anyway! This is just to get some more variety in your mental intake, help you balance your diet so your brain doesn’t get clogged up.” More, she mouthed to the Bibliopothecary over her husband’s shoulder.

The husband picked up another book to glower at. “Never even heard of this ‘Butler’ chick, she can’t be that good…”

The Bibliopothecary piped up. “If you don’t like her you can try something else. There’s a lot of alternatives and options.” The Bibliopothecary smiled and added a volume of Caribbean literature to the pile. The man muttered darkly and left. His wife rolled her eyes and followed him with the book bags. Gretchen stepped up to the counter.

The Bibliopothecary grimaced, but pointed her to the correct aisle.

“Take with a large fancy latte and cupcakes. Expect to need frequent reapplication and for the effects to be short term at best,” the Bibliopothecary warned, writing out the instructions. “I never liked this stuff as a treatment, fast acting but no staying power or deeper impact beyond mild amelioration of symptoms in the best case…”

Gretchen nodded absently and hurried out the door to find a coffee shop that sold good lattes.

The Bibliopothecary was staring impassively across the counter at a Literary Pharmacology student from the local university when Gretchen came in for her third visit.

“You want me to take ROMANCE NOVELS?” the young man wailed.

The Bibliopothecary crossed her arms. “Your Creative Writing professor’s prescription was very clear,” she said sternly. “He wants you to take something that will improve your dialogue writing skills. Romance novels and theatre scripts are your best bets.”

“Can’t I just take the plays?” the student asked, looking with distaste at a paperback with a cover depicting a woman swooning in the arms of a man wearing a kilt and no shirt.

“No. Because plays are really meant to be spoken not read so you’re only getting part of the impact. Romance novels will be better at teaching you what your prof says you need. Both is better,” the Bibliopothecary said.

The Bibliopothecary was unmoved. “That’s my prescription. I’ll make sure I send you home with the best stuff. Well written but fast and easy to swallow. Take it or leave it.”

The young man groaned and bent his head as if for the axe. “… Fine.”

The Bibliopothecary packaged up his books. “Take with wine or hot chocolate. By the beach or in the bath, for preference. Between doses I recommend sitting in public places and transcribing eavesdropped conversations. Have a nice day.”

Gretchen stepped up to the counter when her turn came. “I’m still sad,” she said. Gretchen’s voice sounded flat and empty in her own ears. “I’ve tried everything. Funny books, uplifting books, inspiring books…”

The Bibliopothecary stared at her beadily. Her glasses glinted. The silence stretched and Gretchen felt increasingly uncomfortable.

“I think I know a few everythings you haven’t tried just yet,” the Bibliopothecary said. She stood up and leaned in. “Tell me, do you object to off-label treatments?”

“Take in bed by the light of a single lamp after dark, with a cup of soothing herbal tea,” the Bibliopothecary said.

When Gretchen came back for her fourth visit, the married couple was back. The wife looked smug. The husband looked sheepish.

“Do you have any more of that Butler lady,” he mumbled.

After they left Gretchen came up to the counter. The Bibliopothecary raised an eyebrow at her.

“The narrator was eaten by zombies,” Gretchen said. “I didn’t even know that was ALLOWED.”

The Bibliopothecary shrugged. “It’s not, in some jurisdictions. Did it help?” she asked.

The Bibliopothecary walked into the dystopias and came back with a stack of intimidating hardbacks. The cover of the one on top featured women in red dresses with white winged hoods. The one below that might have been about wildlife; Gretchen dimly remembered that an Oryx was a kind of antelope.

“WARNING: CAN LIT” proclaimed stickers on the spines.

“Take sparingly at first, until you build up a tolerance,” the Bibliopothecary said. “With cheap wine, or bitter black coffee.”

When Gretchen came back for her fifth visit, the Literary Pharmacology student was paying for a stack of Heyers.

“How does she do that? You can tell instantly who’s talking without even being TOLD!” he raved, grabbing a book with a painting of women in regency evening dress on the cover and immediately flipping it open to begin reading.

Gretchen approached the counter. “Those were… really depressing,” she said.

The Bibliopothecary regarded Gretchen calmly. “You didn’t like them?”

Gretchen hugged herself awkwardly. “I… don’t know. Everything was awful and the world was a terrible place.”

The Bibliopothecary went and got a book from the pediatric section. It was a children’s book with a cover painted in soft watercolour wash. Gretchen felt both relieved and oddly disappointed.

“Take with a glass of water, while wrapped in a warm blanket, with a stuffed animal nearby,” the Bibliopothecary said.

The shop was empty of other customers when Gretchen ran in on her sixth visit, soaked with rain. The Bibliopothecary looked up from her regular dose of Burnett, which she took as a tonic against chronic cynicism.

“His mom DIED!” Gretchen cried out.

The Bibliopothecary stood up and came out from behind the counter.

Gretchen burst into tears. The Bibliopothecary enfolded her in a hug.

Gretchen cried and cried, her sobs exhausting themselves into silent weeping and finally into a deep, exhausted stillness. The Bibliopothecary kept holding Gretchen for many long moments after.

Finally Gretchen stepped away, wiping her red wet eyes and nose. The Bibliopothecary stepped back behind the counter to fetch Gretchen some tissues.

“How do you feel?” the Bibliopothecary asked.

The Bibliopothecary nodded. “Ready to try the happy book treatments again, do you think?”

Gretchen rubbed salt from her cheeks, and nodded.

Gretchen put the Burnett in her bag, then looked at the other book curiously. Gretchen opened it to the first page, then flipped through. “It’s blank,” Gretchen said.

“In case we ever have trouble finding you the right book again. You can write what you need to read,” the Bibliopothecary said. “But try the Burnett first. You look tired.”

Gretchen stepped outside. The rain had stopped.

Gretchen wiped droplets off a nearby bench, sat down, and started to read. 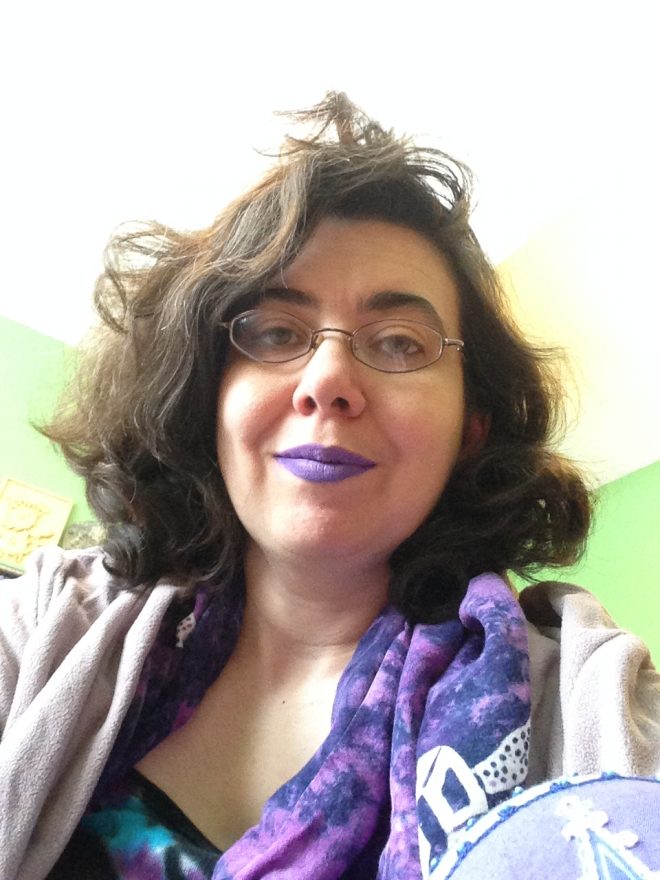 Dani Atkinson is an author in southern Alberta, Canada, who thought that as an introverted book loving computer junkie she was primed for the quarantine lockdowns to be a breeze. That lasted for a couple of weeks until she missed the library so much and became so desperate for company that she started a Teddy Bear Book Club. Dani’s brown bear Teddy most enjoyed reading and discussing the picture books Dani brought home from her year in Japan, while the Baz the polar bear plushie favoured old back issues of fantasy magazines and comics. Their tastes may or may not have been influenced by what they were actually able to hold up when Dani was posing them.  Dani’s short fiction has previously appeared in Daily Science Fiction, Cast of Wonders, and the It Came from Miskatonic University anthology from Broken Eye Books. She sporadically blogs at https://dejadrew.dreamwidth.org

M.K. Hobson is a writer of historical fantasy fiction, and records stories for Beneath Ceaseless Skies and Zero Books. She’s also the cohost of a Web series for Zero Books titled “We Live in a Society.”

Her work has appeared in many publications such as Realms of Fantasy, The Magazine of Science Fiction and Fantasy, Interzone and Sybil’s Garage. Her debut novel The Native Star was published to critical acclaim in September 2010 by Ballantine Spectra.

She can be heard frequently on PodCastle, both as guest host and narrator, and has long been a beloved part of the Escape Artists family. Follow her online or on Twitter.