“So,” says Statica, “we have a bet going about how you got your powers.”

“Really?” They’ve been talking about me!

“Well,” Flashback amends, “we have a bet going on whether you’re Team Science Lab Explosion or Team Woo-Woo Magic.”

“Most people get their powers in one of those two ways,” says Statica. “So?”

“No need to be shy,” says Flashback. “What if we go first? I made a poorly-worded wish about being able to change the past. Turns out I was talking to a djinn. Wishes do come true.” She wiggles her fingers. “Team Woo-Woo Magic.”

“I got mine during a cutting-edge experiment on human teleportation.” Statica flickers out, appearing on the other side of Red Diamond. “Team Science Lab Explosion. We’ve got to stop running tests during massive lightning storms.”

“And you can probably guess Quantum was a science guy.” Statica sounds wistful, and everyone goes quiet for a moment, looking solemn.

The hot buzz of excitement in my chest cools and sinks to my stomach. What is it with people and choosing sides? Guy or girl. Gay or straight. Science or magic. These are superheroes. How can they not get it, that not everybody fits?

“See this?” He shows me his hands. A brilliant red stone glitters in the center of each palm, embedded in his skin. I’ve seen him on TV, using those gems to heal survivors’ wounds after a shooting. “Alien technology. Surgically implanted.” He smiles. “I use them to purify the energy of a curse laid on me when I entered a forbidden tomb in Egypt.” He waves one hand, then the other. “Woo-woo. Science.”

Statica gives him a friendly shove. “Most people are one or the other.”

Red Diamond raises his eyebrows. “There are more things in Heaven and Earth, Horatio.” He winks at me.

I straighten, feeling lighter. I should have known the Watch wouldn’t disappoint me.

“We’re being insensitive,” says Flashback. “Sorry, new kid. I know sometimes these things are personal, and it is your first day.”

Statica covers her mouth. “Oh no! You don’t have one of those tragic backstories, do you?”

“Nah,” I say. “I was the subject of an illegal experiment. Got my DNA mixed up.”

I grin, cutting my eyes to Red Diamond, and blow out a curl of smoke. “With a dragon’s.”

I start livecasting when the boat leaves skydock. The cruise doesn’t guarantee we’ll see an Ifrit, but my classmates will watch, alien monster or no. I’m fortunate my family can vacation offworld. I point my ’caster at our hotel, floating in the lime clouds of Hyperion’s upper atmosphere. I hope the colors come through. This sky is nothing like Earth’s.

My sister Maryam clutches my hand. She’s wobbly, not used to wearing floaties against the gravity. I coax her up front with the other kids as we drop into the pink and orange cloud layer. I include her in my livecast. These are her memories too. And adults who like cute-kid videos will love her.

The wind buffets our boat. Maryam’s grip tightens, but she’s smiling. “It looks like we’re inside a dessert,” she says, and begins speculating on the flavors of the clouds. Her chatter makes good narration.

The captain announces our first wildlife sighting. I maneuver to keep the animals in frame: long, shimmering blue-green ribbons racing ahead of us, looping in tight spirals. “Wil-o’-wisps,” I tell my audience.

One ribbon coils around another and somehow absorbs it.

“They’re eating each other!” Maryam squeals. But then the ribbon splits into three. “Feeding is part of their reproduction,” I narrate, paraphrasing the captain. This could be an exobiology documentary for my college applications.

“It got lonely, so it made friends,” Maryam declares. The adults chuckle.

The captain points out cloud formations, pocket ecosystems of colors and textures. I try to ’cast all of it.

>We feel static on our skin before we hear the rumbling. “It’s our lucky day,” the captain announces. There’s an uncastable odor, like burnt honey, that makes my head swim. Maryam looks uncertain, swaying in her floaties when the boat begins to shake. The wil-o-wisps scatter. It doesn’t save them.

A wall of red and black fire rises in front of us, overflowing my ’caster’s viewport. It ripples, like layered, billowing silks, somehow burning underwater.

Our boat pulls back, revealing the Ifrit. It’s monstrous. A flaming jellyfish-beast, pulsing through the clouds with hollow booms. We feel it in our chests.

First, we’re silent. I forget to check the shot.

Then everyone starts to cheer. Maryam’s eyes are wide, and she’s saying “Oh! Oh!” I zoom in on her. This time, just for her.

We follow the Ifrit, watching. It’s so enormous it fills our minds completely. I run the ’cast unsupervised. Eventually the adrenaline ebbs. I’m drained. I don’t remember returning to the hotel.

At home on Earth, real life began filling back in. Everyone loved my livecast, but attention dwindled week after week, as attention always did. I re-watched, grasping for that sense of awe, but each time the experience felt smaller. More distant. Less real. Except when I listened to Maryam’s chatter.

Months could pass, but her voice always recaptured that day’s wonder. Even years later, I could whisper in her ear, “Maryam, remember the Ifrit?” She’d grin, and we were there again.

Vida slouched away from the yearbook office, grumbling to herself. The camera Ms. Green had given her was no bigger than a cellphone, but it felt as heavy as a boulder.

“Capture people’s true natures,” Ms. Green had said. “Show us who they really are.”

Vida believed she already knew who her fellow students really were: petty, shallow, and exclusionary; or angry, rash, and bullying. The few exceptions were like herself: shrinking, invisible, subsisting in shadows. She doubted she possessed the photographic skills to reveal those truths, however.

Vida headed to the cafeteria where she knew she would find subjects for her assignment, and, as she stepped through the doorway, she felt like a rabbit tiptoeing through a tiger’s den. If she were lucky, the beasts would ignore her. After taking a seat at her usual table, Vida set down her bags and studied the camera, familiarizing herself with its functions. She raised the lens and scanned the room, stopping on a couple whispering in each other’s ears: Emily and Taylor, reigning king and queen of the high school. Vida pressed the shutter button. Moments later, her camera’s view screen revealed an image of the perfect couple, frozen in time.

Vida squinted and frowned. Perhaps it was a strange filter setting, but in the image Emily’s auburn hair was dull, her makeup erased, and her designer clothes appeared mundane and worn. Her previous happiness now looked forced. Taylor’s blue eyes seemed hollow, and his smile had disappeared. They were sitting apart, no longer touching.

She turned the camera to a group of guys laughing and joking at a table nearby. Anthony Jones, captain of the basketball team, strolled the hallways as though he were Moses and the student body was his personal Red Sea, but on the camera’s view screen, he appeared hunched and shrunken. If Vida had to name the expression on his face, she would have said he looked scared.

What could Anthony Jones ever have to fear?

Vida hurried to snap more pictures. There sat Shannon Mayer, not eating because everyone teased her about her weight. But the camera revealed an uncharacteristically proud tilt to Shannon’s chin, a fire blazing in her eyes, a stubborn rigidity in her shoulders. Wei Chen quietly bent over his sketch notebook, but on the camera’s screen he was covered in ink and grinning brightly enough to light up the whole room.

The more pictures Vida took, the less they matched reality. Or… she thought, maybe reality isn’t as real as I thought.

Motivated by that theory, Vida rose and hurried to the bathroom. In the mirror she saw a girl who had trouble meeting her own gaze and often sat in the back of the classroom, refusing to draw attention to herself. Vida raised her camera and pointed it at her reflection.

She hesitated, wondering what truth the camera would reveal.

But she drew up her courage and held her breath.

Then, Vida pressed the button. 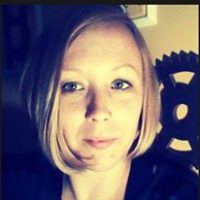 As KB Sluss, Karissa’s short stories have appeared in Cast of Wonders, Daily Science Fiction, Luna Station Quarterly, and Stupefying Stories. She is also an assistant editor at Cast of Wonders and served as Co-Editor for Cast of Wonders-Artemis Rising 5. As Karissa Laurel, she is the author of several adult and YA novels. Her latest YA series, The Stormbourne Chronicles, is a YA fantasy about the daughter of the god of thunder. You can follow her online and on Twitter. 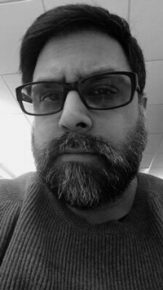 Rajiv Moté is a writer living in Chicago who moonlights as a software engineering manager. He completed certificates in creative writing at both Northwestern University and the University of Chicago, and has fiction published in Unlikely Story: The Journal of Unlikely Observances. He takes perverse glee in whittling down word count and killing his darlings. His daughter and wife star in his personal cast of wonders. He’s on WordPress and Twitter as @RajivMote, which is a continuing source of puzzlement and shame. 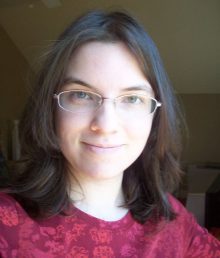 Anica Lewis is a Youth Services librarian as well as a writer and reader, the better to squeeze more books and bookish people into her life. She is definitely not the secret identity of any superhero. Why would you even ask that? You can follow her online or on Twitter. 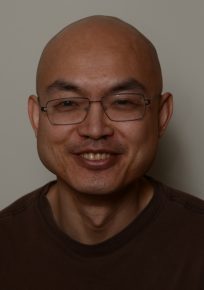 John Chu is a microprocessor architect by day, a writer, translator, and podcast narrator by night. His fiction has appeared or is forthcoming at Boston Review, Uncanny, Asimov’s Science Fiction, Clarkesworld, and Tor.com among other venues. His translations have been published or is forthcoming at Clarkesworld, The Big Book of SF and other venues. His story “The Water That Falls on You from Nowhere” won the 2014 Hugo Award for Best Short Story (available narrated by John himself at EscapePod). 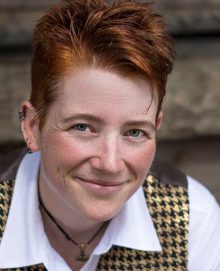 Alex Acks is an award-winning writer, geologist, and sharp-dressed sir. Angry Robot Books has published their novels HUNGER MAKES THE WOLF (winner of the 2017 Kitschies Golden Tentacle award) and BLOOD BINDS THE PACK under the pen name Alex Wells. Their steampunk novella collection, MURDER ON THE TITANIA AND OTHER STEAM-POWERED ADVENTURES, was nominated for the Colorado Book Award, and the sequel WIRELESS AND OTHER STEAM-POWERED ADVENTURES is available from Queen of Swords Press. They’ve had short fiction in Tor.com, Strange Horizons, Giganotosaurus, Daily Science Fiction, Lightspeed, and more, and are a contributing editor at Book Riot. They’ve also written several episodes of Six to Start’s Superhero Workout game and races for their RaceLink project. Alex lives in Denver (where they bicycle, drink tea, and twirl their ever-so-dapper mustache) with their two furry little bastards.