Did you think I forgot about you? That all my emails were sent from pity? I flew to your doorstep and knocked so many times, but you never answered, though I could see the heat of you through the door with my infrared vision.

Tell me, Patrick: when I gave my whole life to battling the monsters, why did you have to join them? Each night alone in my bathroom I bandage my raw, bruised knuckles and sew up new wounds. I’m strong, not invincible. Meeting you at the quarry that day nearly shattered me to my innermost core. You, Patrick, the boy who read aloud Choose-Your-Own-Adventures and let me pick the endings, now remade into a thing of rust and steel and pulsing electricity. I only knew you by your heat signature.

I thought it was just power armor, Patrick. But they say you’re all machine now, that the flesh is gone, discarded for something you thought improved you. Didn’t you know that I wouldn’t care? That all bodies are machines? Blood, bone, oil, steel–just a medium, a carrier of your will. What matters is what you do with it.

Why couldn’t you just be happy for me, Patrick? Why did it have to be a competition? Somewhere there’s a universe where friends celebrate each other, where nobody knocks down a city like an existential 2-year-old afraid of disappearing if nobody watches him every moment of every day.

I bet in that universe nobody has superpowers, because nobody goes villain.

Because we were childhood besties, Patrick. That much is true. But now I’ve got you cornered in your hideout, and I’ve pinned you in a bear hug that really is a hug. And before I squeeze any tighter and begin to crush your artificial parts–the chassis, the wires, the ball bearings, the pistons–I want to know one thing. Did you lose yourself inside this machine? Or is it just thick armor, insulating you from the hurt, the hate, the hug I’m trying to give you, if only you could feel it?

A Coat of Salt and Sand

They met in a small cove near Land’s End, in the days when tin mines still stained the coast rust-red. She was a wild thing, with a tangle of sea-bleached hair. By summer’s end, so was he.

They swam, and climbed, and he learned to startle limpets from the rocks. They cooked fresh mackerel over a driftwood fire.  Some days, they borrowed a skiff from one of the fishermen and rowed to isolated inlets where seals basked fearless in the sun.

They didn’t share names–he never thought to ask, and she’d never seen the need for them anyway.  She kissed him, once, in the shadows of a sea-cave at low tide.

Perhaps that’s why he paused on the clifftop that evening. How he saw what he shouldn’t have: the moment when she changed.

He found it by touch at the very back of the cave, where the sand turned softly dry.

They’d stay with you if you took it from them, the legend said.  If that was what you wanted.

He wanted something else.

He hauled the salt-stained leather over his shoulders, willing the dream to work. Outside the cave the breakers foamed over his knees, bringing doubt, then worry, then fear.  He floundered deeper, her coat flowing like seaweed around him as his hopes ebbed away.

It was only when the first wave broke over his head that he became what he was meant to be.

It felt like a dream of flying.  The sea was alive and he was its child, enriched by its chill exuberance, borne out and up and deep, deep down at its will.

Too deep. Too cold.

Consciousness crept back uncomfortably. His eyes stung and his lungs ached, and his body shook uncontrollably.

“Will I see you again?” he asked as she helped him up.

“Maybe,” she said, and he knew it meant goodbye.

The boy grew, changed, and voyaged far. He made the sea a part of him, as much as any man can, learning its wild strength, and the grace of his own fragility.

Sprays of orange-red flowers bloomed on the cliffs.  Old paint flaked from hull of the sole remaining boat. Treading softly, he followed the tide out as far as it went…but the cave he remembered was no more than a tumble of fallen stones.

He wasn’t going to find her. He’d be cut off if he kept trying. He ought to go back, back to dry land, where nothing but his shoes awaited his return.

He kept walking. This was his place, too, whether she was there or not.

And then she was.

The selkie-girl was older now, but her sea-green eyes were still wild and young. In her outstretched arms she held a coat of salt and sand.

She is fourteen and one quarter and I am sixteen the first time she comes to the bend in the creek. She has cried so long and hard that she’s gone hollow, and she doesn’t see me. She listens to the hushed apologies from the water over the rocks and leaves when she’s soothed.

She comes back. Even after she sees me, she returns. Her name is Emma. We don’t talk about why I am here, why I can’t tell her my name. We talk a little about the wounds that bring her to the creek, about the reasons or lack thereof for them, but mostly we talk about important things. She wants to get into radio, maybe podcasts, Emma says. I’ve never heard of her favorites, or of podcasts, so she brings a player with her favorites loaded on it. She takes it when it’s empty, brings it back charged.

I always wanted a best friend.

She is fifteen and a half and I am sixteen the first time Emma tells me she wishes she were dead. I wrap her in my arms and stroke her hair and whisper, “It won’t help.”

“You’re cold,” she murmurs, but she doesn’t pull away.

“They won’t regret what they did. They’ll think it’s funny, watching you fade away to bones, but they’ll forget and time will do the rest. If someone reminds them, they’ll say it was a shame how everyone else treated you. No one will remember hurting you, only that someone else did. And you’ll go on hurting.”

We are both sixteen when she presses her lips to mine. It is the first kiss for both of us.

“You taste…” I look away, afraid of what she’ll say, murmuring sorrysorrysorry along with the creek. “Earthy.” Emma rests her head against my breast. “They’ll hate me more for this. If I were dead, could I stay with you?”

“I don’t know,” I admit. “It will hurt the people who love you. You don’t know many of them yet. They’ll live their lives with an empty space in their hearts, and they’ll never know you were supposed to make them whole.”

It is a long time before she comes back.

She is seventeen and three quarters and I am still sixteen when she returns. Emma carries a spade, and she says, “I’m leaving.” She thrusts it into the dirt, strikes bone. “I thought you should, too.”

I listen to the creek’s burbled apologies. “I can’t.”

She hugs me, strokes my hair, and whispers, “Stephanie Jane Wright.” The words shatter me completely. “I couldn’t leave you like this. There’ll be police and a fuss. It’s not the end everyone who loves you wanted. They thought you ran away.”

I murmur sorrysorrysorry, but she kisses my lips and my forehead. “I wanted to say goodbye first.”

She is seventeen and three quarters with so many years to go, and I am free. 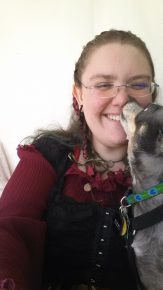 J. Lily Corbie is a lifelong horror and fantasy enthusiast. She’s passionate about mythology and folklore and loves bats, bones, butterflies, and octopuses. Her work has appeared on Pseudopod. She lives with three cats and a dog, and you can follow her on Facebook and Twitter.

Rachael K. Jones grew up in various cities across Europe and North America, picked up (and mostly forgot) six languages, and acquired several degrees in the arts and sciences. Now she writes speculative fiction in Portland, Oregon. Her debut novella, Every River Runs to Salt, is now out with Fireside Fiction. Contrary to the rumors, she is probably not a secret android.

Rachael is a World Fantasy Award nominee and Tiptree Award honoree. Her fiction has appeared in dozens of venues worldwide, including Lightspeed, Beneath Ceaseless Skies, Strange Horizons, and is an Escape Artists Worldwalker, having been published at all four podcasts.

Alasdair Stuart is a professional enthusiast, pop culture analyst, writer and voice actor. He co-owns the Escape Artists podcasts and co-hosts both Escape Pod and PseudoPod.

Alasdair is an Audioverse Award winner, a multiple award finalist including the Hugo, the Ignyte, and the BFA, and has won the Karl Edward Wagner award twice. He writes the multiple-award nominated weekly pop culture newsletter THE FULL LID.

Alasdair’s latest non-fiction is Through the Valley of Shadows, a deep-dive into the origins of Star Trek’s Captain Pike from Obverse Books. His game writing includes ENie-nominated work on the Doctor Who RPG and After The War from Genesis of Legend.

A frequent podcast guest, Alasdair also co-hosts Caring Into the Void with Brock Wilbur and Jordan Shiveley. His voice acting credits include the multiple-award winning The Magnus Archives, The Secret of St. Kilda, and many more.

Visit alasdairstuart.com for all the places he blogs, writes, streams, acts, and tweets.