“Careful not to drop that on your head,” Edson Vole warned, pointing to the huge beveled mirror leaning against the wall. “Unless, of course, you know the Indian rope trick.”

Sanjeev Ravi laughed, clipping a tape measure onto his utility belt. “No such thing, Mr. Vole,” he said in a gentle lilt.

“That mirror weighs a ton,” Edson said. “Couldn’t lift that even during my days in New Delhi. Back in an hour.”

As Edson waddled out the door of his new one-story bungalow to his car, his mind raced through the dozens of nick-knacks and pictures still needing placement. Moving from a large two-story to a one-bedroom was a challenge.

Then reality attacked as he thought of meeting with the loan shark. His pulse jumped. His palms sweat. He panted.

Damn, my car keys, he thought.

As Edson turned back, a daisy caught his eye and he winced as he bent to pick it. For Mary, he thought.

In the doorway, Edson froze and dropped the flower.  The huge mirror was up on the wall of the living room, evenly balanced, with Sanjeev on a step stool, polishing the surface.

“How the bloody hell!” Edson shouted.

Sanjeev froze in place, his hand holding the cloth, his mouth in the shape of an O. Then he said matter-of-factly, “It isn’t that heavy, Mr. Vole. When you measure accurately and position your body right, it’s quite easy.”

Edson frowned, looking at Sanjeev’s small frame and slight build, not much bigger than his own shriveled eighty year old shell. “Hmm. Well, I guess that’s why we hire handymen, isn’t it?”

Puzzled, Edson went back outside to his car. As he started the engine, a fleeting memory of Florida flashed through his mind — Florida, limestone, and the strange hermit he knew there. Then the loan shark’s smarmy face returned and Edson’s heart skipped a beat.

A six foot double door pantry, big enough to store food and water for weeks, arrived the next day, with Sanjeev to do the installation. After Edson signed for the unit, the delivery man left and Sanjeev set to work. Edson went into the bedroom.

Mary Vole, gaunt, with sunken eyes and mummy cheeks, lay flat on her back in bed. Mary moaned as Edson slipped his hands underneath her and tried to pry her onto her side. Edson grunted but she hardly budged.

Mary said, “Stop. You’ll throw out your back again.”

“Haven’t turned you today. Used to be I could turn you all the time.”

Then Edson thought of Sanjeev in the kitchen. No one could install that pantry by himself, Edson thought, not without really good leverage.

Edson stepped out into the living room, caught his reflection in the big mirror on the wall, and stopped outside the kitchen. As he peered around the doorway, he saw the pantry float six inches off the linoleum, glide toward the wall, and start to slip between the refrigerator and the sink counter. The pantry rubbed against the side of the counter, then stopped and backed up. As the pantry hovered, Sanjeev stretched his tape measure across the floor.

Edson shook his head and gasped.

Sanjeev spun around, the tape measure snapped back into its reel, and the pantry landed with a jolt.

Edson exclaimed, “You can levitate!”

“When Mary and I lived in Florida, we knew a man who built a home out of limestone, by himself. He could lift one-ton blocks by himself, a small old man. I witnessed it one day when he thought no one was looking. When I confronted him, he denied he had any power, and was careful to never let me catch him again. And he never told anyone how he did it.”

Sanjeev sighed. “The Coral Castle. I have heard of it.”

“Do you possess the power?”

Sanjeev sized up Edson and admitted, “It’s a mental power some people have.”

“My wife is bedridden. She needs to be turned several times a day, but I don’t have the strength. A nurse comes once a day, but that is all we can afford. Caring for our grandson’s brain cancer took all our money. We lost our home and moved into this bungalow.”

“The cancer killed our grandson and ruined our daughter’s marriage. We never see her.”

“You sound British, Mr. Vole. You said you were in New Delhi?”

Edson nodded. “My first job was teaching English there. I met my wife, an American, working in an orphanage attached to the school.”

Edson waddled to the piano and came back with a photo of a slim young woman surrounded by children in a play yard. “The kids loved her. She taught English better than I did. She was like a mum to them.”

Sanjeev sighed, then a faint smile turned up the corners of his mouth. “I do not remember my mother. But I remember the orphanages and foster homes I lived in throughout India after she was killed by drug lords. I learned many things, especially from monks in a certain monastery who showed me how to use my hands and my mind. Where is your wife, Mr. Vole?”

Edson led him to the bedroom. “She cannot leave the bed. Mary, this man can levitate just like the old man in Florida.”

“She has horrible bedsores, Sanjeev.”

Sanjeev focused on her. In a moment the old woman hovered over the bed, and Edson turned her on her side.  Then Sanjeev lowered her.

Edson loosened Mary’s gown from the back, and Sanjeev winced at red blotches on her ankles, lower spine, elbows, and shoulders.

“She has stage two pressure ulcers,” Edson said. “She will need debridement if I can’t turn her more often. I don’t want her to endure that.”

Sanjeev grimaced and then he and Edson went out into the living room. Edson pleaded, “Mr. Ravi, will you share the secret with me?”

Sanjeev looked around the room. “Every object of mass has a vibration, a resonance. I focus my mental energy on an object, find its frequency, and tune it to deflect gravity. I use it sparingly in America.”

“Can you levitate yourself?”

“No. But I can lift anything else to a limit. I have passed the power on to a few people. I would need to focus my mind on yours, transfer a small portion of mental energy, and with a little practice, you can levitate objects. If you are found out, there are those who would kill you and your wife to obtain the ability.”

“Please, Mr. Ravi, my wife cries out from pain in the middle of the night. Neither of us has long to live. My wife is withering away–”

Sanjeev focused his mind on Edson’s.

Sanjeev completed the installation of the pantry, with Edson levitating tools and materials to him. After a last admonishment, Sanjeev left, and Edson visited Mary.

Edson levitated her and turned her. She sighed with euphoria as he set her down.

Leaving the bedroom door open so she could see, Edson planted himself on the sofa, and lifted objects all about the living room. He set a heavy lead crystal vase on the mantle, Hummel figurines on the piano, china plates of Charles and Diana next to china plates of William and Kate on a shelf. He rearranged objects like chess pieces.

Then he placed several pillows on the floor, and practiced levitating the crystal vase over the pillows, dropping the vase fifteen feet from the vaulted ceiling.

When he was satisfied, Edson made a phone call. He hung up and went back into the bedroom.

As he entered, Mary switched off the cordless phone she always kept next by her side.

Edson said, “At noon tomorrow, all of our money problems will be solved!”

“Edson Vole, my favorite client,” Pinky said, wearing a sharp three piece suit, his manicured fingertips clinging to the handle of an attaché case. He entered the living room. “Ten thousand, Vole, like I told you on the phone.”

“You couldn’t get it?” Pinky looked around the room and snarled. “You should sell all the crap in here. Sell the piano. Put your wife in county hospital. Where’s all that cold cash you geezers like to stash?”

Pinky stopped in the middle of the room, set his case down, and lit a cigarette.

Edson wrinkled his forehead and focused on the crystal vase on the mantle. The vase rose and floated silently across the room, stopping directly over Pinky’s head.

“Don’t look at me like that, Vole, you squirmy little rodent.” Pinky blew smoke rings. “How are we going solve our little problem? Maybe your wife needs some heat therapy.” He pointed the cigarette at the bedroom door.

Suddenly the vase returned to its spot on the mantle and Pinky froze in place, the cigarette still glowing between his fingers. Edson’s face twisted in confusion as Sanjeev Ravi entered from the kitchen. Sanjeev stood before Edson and crossed his arms. “Your wife called me at the hardware store yesterday.”

Edson looked up at Sanjeev sheepishly. “I needed cash for the down on this house.”

He laid the case on the carpet, opened the lid, and whistled at bundles of cash. “Looks like you’re not his only stop today.”

Sanjeev unbanded different denominations and counted out ten thousand dollars. “Do you have a large envelope?”

Edson grabbed one from a desk in a corner of the room and Sanjeev stuffed in the bills. Then Sanjeev put the envelope back on the desk.

Sanjeev smiled. “I am in this country because there are those in India who would control me. I live the most quiet, simple life I possibly can here. That is all I will tell you. Now give this man his money.”

Sanjeev went back into the kitchen and Pinky came back to life.

“Like I said, Vole, your wife needs enhanced interrogation. I have commitments of my own to make. I need that cash.”

Edson sighed and pulled the envelope off the desk.

Pinky snatched it and counted the money. “Thought you didn’t have any.”

“My daughter cashed in an IRA she was saving for her retirement.”

“Ah, commendable. Let me know if she wants to do business.”

Pinky stuffed the envelope in his case and left.

Sanjeev pursed his eyebrows and glared at Edson’s forehead. Edson felt a tingle and knew his levitation ability was gone.

Sanjeev nodded and they went into the bedroom.

“Can we turn her one last time, Sanjeev?”

Edson turned her from left to right, right to left, and back again.

Sanjeev said, “I have levitated her one fourth inch above the mattress. She should turn easily. We’ll leave her like that for now. It will last quite a while and no one will notice. Call me if the frequency deflection decays and I will make a house call.”

Edson walked Sanjeev out to the front stoop.

Sanjeev said, “Sorry, Mr. Vole, but not everyone can be trusted with the ability.”

Edson cast his eyes down and then looked up with a glint. “Are those Indian rope tricks for real? You could make a mint in Vegas, outdoing those fake magic acts.”

Sanjeev smiled. “How do you know they’re fake?”

Suddenly a bunch of daises, fresh dirt clinging to stems, floated in front of Edson. 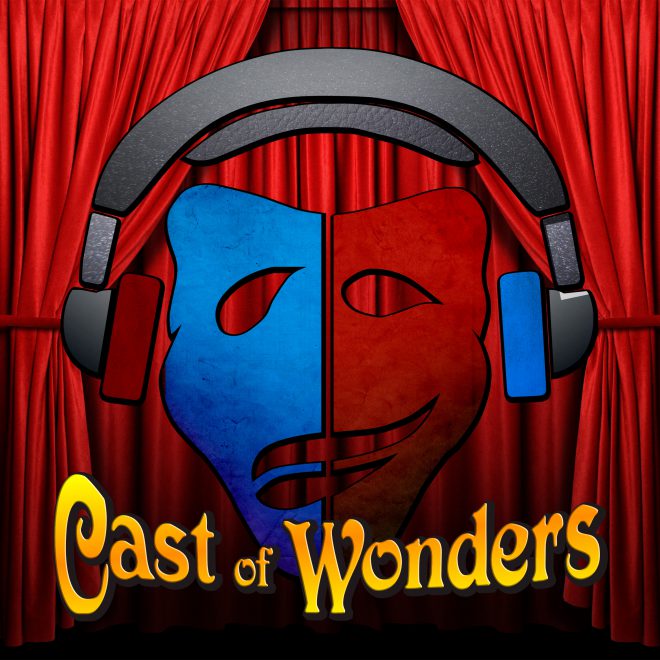 James Fitzsimmons holds a BA in English from California State University, Los Angeles where he studied literature and creative writing. He works as a computer programmer and lives in Long Beach CA. His interests include music, theater, musical theater, and fiction. James says that writing a computer program is much like writing a story, but hopes his stories have fewer bugs! 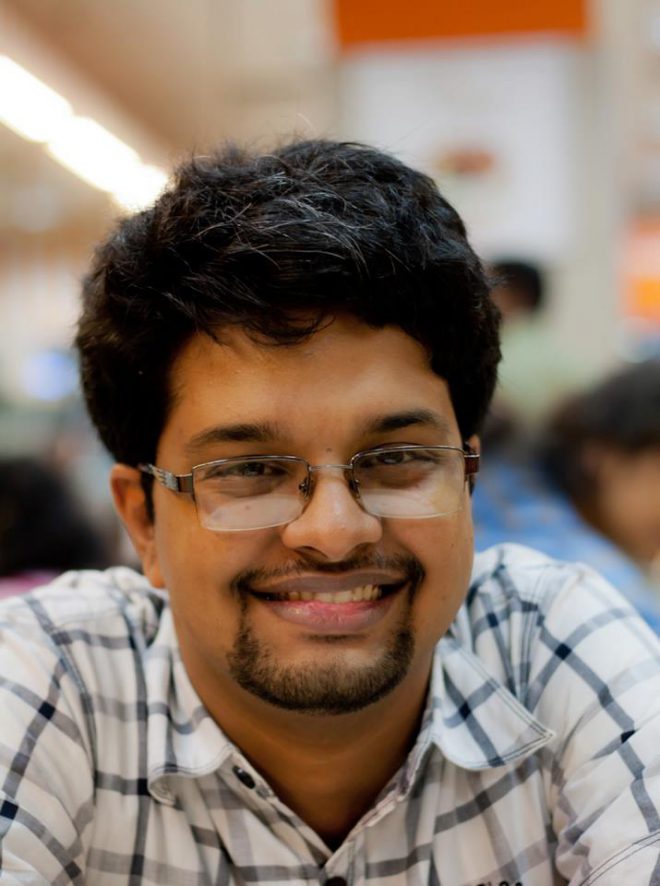 Kaushik Narasimhan is a management consultant by day, writer by night and psychonaut every weekend.