Aisha Bets Her Life on Magic

Aisha Gonzalez was half asleep when the ceiling pressed against her nose.  She made an unconscious move to brush away whatever was touching her and smacked the textured surface of the ceiling hard with the back of her hand. She started awake, scraping her forehead. She barked out a scream and shoved hard at whatever was hovering over her.

Aisha’s mattress receded from the ceiling, bumped against her box springs, then slowly floated upwards. She watched the ceiling move closer with wide eyes, then raised her foot and pushed off back toward the floor. She rolled onto her stomach and looked over the edge of the mattress. She was still in her little studio apartment. Her work clothes from the day before were scattered on the floor next to her humming box fan. Outside the French doors that led to her rickety little balcony she could see the lights from the Speedway gas station next door. The mattress rose and gently pressed her back against the ceiling.

She lay still, sandwiched between mattress and plaster, staring down at her apartment.

“I’m awake,” she said aloud just to hear her own voice. “I’m not dreaming.”

For a moment, she thought about being afraid, but it didn’t feel right. Her eyes moved to her bookshelf. There were dozens of fantasy books there. She was nearly twenty-two, but she still revisited her childhood favorites every year. Those books had always resonated with something in Aisha, something that whispered, “there’s more going on here than meets the eye.”

She wasn’t frightened. She was validated. A slow smile grew on her lips. Something impossible was happening. Something unexplainable. That, Aisha reasoned, meant that all bets were off. She laughed and hammered the mattress with her hands and feet, stuffing her face into the bed to muffle a scream of pure excitement.

A giddy electricity ran through her limbs and a million ideas of what to do next shouted for her attention. She should experiment with the floating mattress, see how much weight it could lift.  She should turn on the lights and start filming the experience with her smartphone. She should call Denise. Tell her to get over there right now. She should call the news and…

None of that seemed right. Aisha thought of the hidden worlds and secret magics she had loved in her books. She thought of the men and women who were chosen, plucked out of the gray sameness of the everyday life to face fantastical destinies and magical journeys of growth and discovery. You didn’t step into the wardrobe with the National Guard and an army of scientists. You didn’t post pictures Hogwarts on Twitter. You marched bravely into the unknown and awakened to a wider world and a more fully realized self.

Aisha looked around at her messy apartment and wondered what on earth that model meant in her own situation. She pushed herself to her hands and knees, fending off the ceiling with her back, then moved to a sitting position. She tried to let the ceiling rest on her head, but the texture of the plaster hurt her scalp. So, she used a pillow as improvised protective headgear.

She scanned the room for a clue. Some hint of how to continue on her own magical journey, but her apartment was just… her apartment. There were no shimmering portals to other worlds. No fairy godmothers. No secret doors. No wizard guide spoke up to coax her out of her hobbit hole.

For a moment, she almost panicked. She had a horrible vision of getting up and going to work in the morning and coming home to a floating mattress. Then, the same thing the next day. And the day after. She would buy a stepladder to make it easier to get into bed. Night after night she would hope to wake-up to the next stage of her magical journey, to the wider world of miracles that the mattress seemed to promise her. Until, one day, angry and defeated, she’d get rid of the mattress and buy a normal bed. She would try to pretend that it never happened. She would just open up the doors and let it float out of her life.

With that thought, Aisha noticed that the mattress wasn’t quite floating directly upwards. It was listing a bit toward the far wall, toward the French doors that opened out onto the balcony.

“Float away,” she whispered.

The thought made her dizzy. Floating up and away into the night sky. No way to steer. No way to control it. No way to come down or come back. It made Aisha’s stomach turn. It was out of the question. It was ridiculous. It was terrifying. It was perfect.

Of course it would be something terrifying and foolish. It would have to be. If it was easy or obvious, it wouldn’t be special.

She looked out the double doors at the florescent glow of the Speedway gas station sign and clinched her jaws. For a moment, she considered gathering up supplies. Maybe a backpack full of food. Maybe a few sets of clothes and her warm coat. But, she had a creeping feeling that it was now or never, that if she stopped to plan and be rational she was fighting against the spirit of the thing and the magic of the moment might pass.

It was late summer. The night air was warm, but had the smell of autumn. Aisha was poised on all fours, her back against the ceiling, listening to the sounds of the traffic out on the nearby highway. She hesitated. She could see an old man with a shining bald spot emptying the trashcans at the gas station. She could just barely hear the tune he was whistling. It was “Somewhere Over the Rainbow.”

Her regret was almost immediate. She looked over the edge of the mattress for a moment, but her stomach jumped to her throat and she felt like she was sliding off into what had quickly become a hundred foot drop. She gathered her comforter around her and curled up in the exact center of the mattress. She didn’t dare look over the edge again, but she could see the blinking red light of a radio antenna on a distant hill. She watched the little light sink towards the edge of her bed like a tiny setting sun falling toward the horizon of her mattress. The little sun set and Aisha lost all perspective of how high she was or how fast she was rising, except for the whipping wind and constant feel of increasing momentum.

She knew she had made a terrible mistake, but she no longer had the will to articulate her dread. All her thoughts were bent toward what was going to take her life first. Would she freeze to death? Would the air become too thin to breath? Would the terrible magic of the mattress finally fail and leave her cartwheeling toward impact like a ragdoll?

Her sense of time had abandoned her with her sense of speed and direction. She could no longer guess how long she had been huddled in the center of the mattress, waiting for the end. But, the question of what would kill her seemed to be answered. Every panting breath was becoming painful. Her lungs seemed to be drawing the bitter cold into her body, but little actual air was coming in with it.

The feeling of weakness and vertigo overwhelmed her and Aisha found herself laying flat with her cheek against the mattress. A ring of light grew on the edge of her vision. It was a pinkish white sort of light. For a moment, she thought that this must be death, but the light grew to something more familiar. It was a sunrise.

The certainty of death had stolen the terror from the edge of the mattress. Aisha reached out with shaking hands and pulled herself forward to look down at the growing light.

When she saw it, she wept. She wept and touched her own face and wanted new words for happiness and wonder.

It wasn’t a single castle or citadel or spire, but a city of castles and citadels and spires. It was a landscape of structures each of which was a singular wonder on its own. It was a world of miracles. It was magic.

Aisha was still floating on her mattress, but she realized that she was no longer moving upward. She was moving forward toward the wonder-scape. She was moving toward a great arch made of green and blue luminescence. Beyond it, she could see courtyards of multi-colored stone and flowering plants at the foot of the nearest castle. Figures in flowing robes moved about casting light and darkness from outstretched hands.  Water leapt from fountains, irredesced in the morning light, and shifted to bright birds of dizzying varieties before falling again in a spray of water. The air above the courtyard was alive with riders on flying horses and other creatures that that had no analog in the world Aisha had left behind.

Just outside the entrance arch was a tumble of flat stones in every shade. But, they weren’t stones. Aisha squinted at the dull shapes as she floated closer. When she realized what they were, she threw aside her comforter and stood in the center of the mattress in her pajamas, laughing loud into the morning sky.

Riders on silver-blue dragons flew from the arch and blew blasts on spiraling horns. They each shouted excited welcomes to Aisha, calling her by name. She waved both arms and nearly vibrated her joints loose with pure excitement. Her flight slowed and gently descended toward the colossal mounds of discarded mattresses at the mouth of the arch. The feeling was unmistakable. Aisha was finally home. 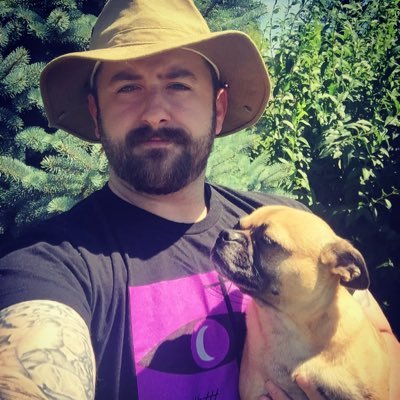 Jarod K. Anderson lives in a white house between a forest and a graveyard. He writes and narrates The CryptoNaturalist podcast, a scripted, bi-weekly audio drama about unusual nature (@CryptoNature on Twitter / cryptonaturalist.com). You can find more of Jarod’s writing in places like Asimov’s, Escape Pod, and Apex Magazine. 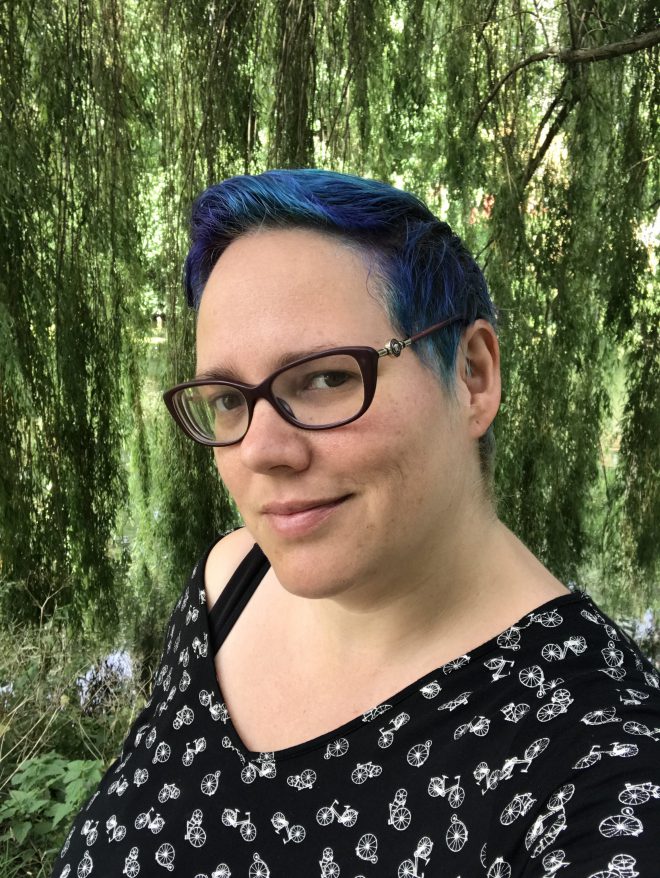 Julia Rios is a queer, Latinx writer, editor, podcaster, and narrator whose fiction, non-fiction, and poetry have appeared in Daily Science Fiction, Lightspeed, and Goblin Fruit, among other places. Currently a Hugo Finalist in three categories, Julia won the Hugo award in 2017 and 2018 as Poetry and Reprint editor for Uncanny Magazine, as well as being a previous Hugo Finalist as a Senior Fiction Editor for Strange Horizons.

Julia is a co-host of The Skiffy and Fanty Show, a general SF discussion podcast, and an Escape Artists Storyteller, having narrated for all four podcasts.