The seven-pointed star was pink and gold, and hung in the night over the dome like it heralded more than just a refueling stop and convenience store. The dome sat alone on a rocky, airless orb at the outer reaches of the system, so small and distant it didn’t have a name. From a ship on approach, the dome resembled a fallen globe on a tripod, with the three docking rings at the end of the airlock.

Tan was restocking Queen Shooga’s Sodium Sulfate Bars and thinking, “Thirteen more hours. Thirteen more hours.” The airlock chimed, then lensed open with a whine and hiss, and a Miradalina slid from it. She was young; none of the seven brood polyps behind her ears had hatched, and the shell on her back only spiraled three times. Probably on her first holiday without a chaperon.

“Greetings, daughter-of-the-sea!” Tan called out. “Welcome!” She glanced in his direction, waved her ears gently, and slid down the aisle of cold drinks. Tan was relieved to see that she trailed a slick salvager; Miradalin trails did a number on the mop. He set the box of sulfur candies down and heaved to his feet, tucking his sandy hair behind his ears as he walked to the Galactacard Omni-denominator register.

As he stepped behind the counter, the airlock chimed again. A meter-tall mass of scarlet centipedes half-writhed, half-rolled into the store, stopping at the counter, where several of them raised their heads to click at him. Tan glanced down at the Galactacard’s translator screen, then back up and said, “Gentlemen, you honor me by advancing the Hive here at Snak-E-Star. You’ll find the ecdysium down this hall on my right, after the relief stations for males, females, and drones.” He didn’t relish cleaning up the shell remains later. And it took days to get the smell out. He shrugged; at least the Hive tipped well.

The Miradalina slid up to the counter and extruded her selections

Three cubes fell onto the counter. Tan swept them into the omni-denominator, which spat out three flat squares. She absorbed her change, burbled a brief melody, and slid out.

“Ten more hours. Ten more hours. Ten more hours.” Tan was through restocking and was feeding the products in the Live Snacks aisle when he realized the Hive was still in the ecdysium. Usually ecdysis — shedding the old shells — only needed a couple of hours. What could be taking them so long? He was on his way to knocking discreetly on the door when the airlock chimed twice. He paled as the pair entered. Fierce, unblinking eyes over serrated beaks swept the store. They had to angle their long, feathered bodies forward to avoid bumping the three-meter-high ceiling as they walked. Tan ground his teeth at the screeching their talons made on the floor and petitioned all Space that they were in a hurry. They had to be in a hurry. They were obviously a new nesting pair on their First Flight holiday. He was supposed to greet all customers, but didn’t dare speak to them first; it had taken weeks to regrow his fingers.

The lock chimed again. “What am I today?” Tan complained to himself, “Capitolus Station?” A two-meter cube, a small sphere half-buried under it, rolled in. The cloudy, swirling surface, he knew, was more in deference to the sensitivities of the Balannee within, than out of politeness to those outside; but he was grateful that he didn’t have to see them either, or catch a whiff of their dank atmosphere. Icons flashed along the front edge of the cube. After reading the translation, Tan typed out his answers, which glowed from the front of the counter, above the – well, he thought of them as “magazines,” even though some of them were “read” by eating them.

The Balannee tank blinked and rolled to the hot drinks, flashes and glimmers within as the occupants “spoke” to each other.

In the Live Snacks aisle, the KaaHaa couple were having what Tan’s mother called a “tiff.” The female clutched a box of fuzzy ten-legged things that Tan never could pronounce in her frail, claw-like hands. Her “kak, ka-kak kah” sounded very irritated, and reminded Tan of other young brides he’d known. They were out of range of the Galactacard’s translator, but he could guess what she was saying. Her nestmate made short, irritated “tok tok” sounds, apparently trying to calm her, but she was having none of it. Her “kak, ka-kak,” grew louder. He bobbed his great, triangular head up and down and trilled a purring sound. She hopped from foot to foot, swinging the box of insects. Her voice grew shrill, and “kik-kik, kee-ee” mixed in.

The male jumped back and straighted up as tall as he could in the relatively low store. “Uh-oh,” Tan thought. He tried to casually cover his ears. The Kaahaa’s shoulders started to spread, his fists pushed together in front of him. “Tsaaai!” He cried out, a call uncannily like the eagles and hawks of old. It made the shelves rattle. The Balannee tank glowed orange for a moment, then faded.

She turned away from him, her beak pointing high in the air, and started toward Tan. Her mate had just opened his beak again when Tan heard a door hiss on his right. “Oh, not now,” he whispered.

The Hive slid out of the hall, bright pink instead of scarlet, and froze. Somehow, Tan felt them focus on the two avians, who stared back at the mass. Tan felt like the pivot point on a carefully balanced scale, helpless to tip it one way or the other. There was a frozen moment.

The Hive stack suddenly collapsed into its component members, who rocketed in all directions. The avians pounced, snapping at the scurrying insectoids. Bottles smashed on the ground as the half-meter millipedes climbed displays. Shelving buckled under the weight of the huge birds, boxes tearing and tubs cracking as the giants sought out the smaller beings. Tan watched his inventory being destroyed and scowled before twisting a knob under the counter.

A dissonant, piercing alarm filled the shop. The KaaHaa fell to the floor and tucked their heads under their wings. The Hive members shrank further into whatever cover they had found. The Balannee tank glowed a bright yellow. After seconds that seemed like minutes, the alarm stopped.

The KaaHaa slowly drew their heads out as the Hive members sought each other, reassembling as they could. The Balannee tank faded to white. They all turned to Tan, who was standing on the counter with a very mean-looking rifle.

“No eating the customers!”

“One more hour. One more hour. One more hour.” Tan stood behind the counter, too tired to do anything else. The reports on the damaged merchandise had been long, but they were just reports. Thankfully, the Hive had elected to not press charges, and had tipped him forty percent, besides. The embarrassed KaaHaa had given him contact information, grateful that recompensation would be the only penalty.

It had been the cleanup and repairs that had done him in. There were parts of the floor where some of the more extreme beverages had eaten away the tile, some of the shelves weren’t level, and he hadn’t gotten the aisles even when putting the shelving back in place. But it was close enough. At least there had only been a couple of customers in that time.

The lock chimed, and he suppressed a groan.

A space-suited figure came through the lock and reached for its helmet clasps. Lathe, her dark pageboy cut as ever-present as her wide smile, was inside. “Hey, Tan, how was your shift?”

“Am I glad you’re here,” Tan said with a sigh. “It’s been a long week. You won’t believe what happened today…”

He told her about the day’s events and had her read the reports. When she was done, she said, “Why don’t you log out and take off a little early?” He nodded and went for his space suit.

Employees had to land behind the dome so they wouldn’t take up a docking ring. Lathe was helping him into his suit when she said, “You could look for another job while you’re on-planet. You know, only work eight or nine hours a day, breathe atmosphere, see people.” 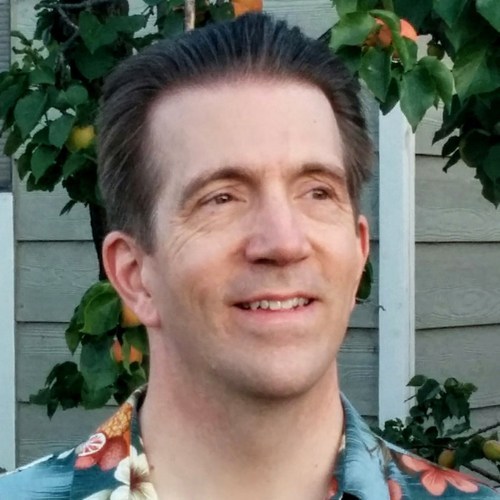 Darin Ramsey is currently a technical editor for a large engineering concern in Washington State. When not translating obscure engineer-ese into no less obscure business English, he spends time at home with his wife, three out of four sons, and six cats (which he will tell you is four cats too many). 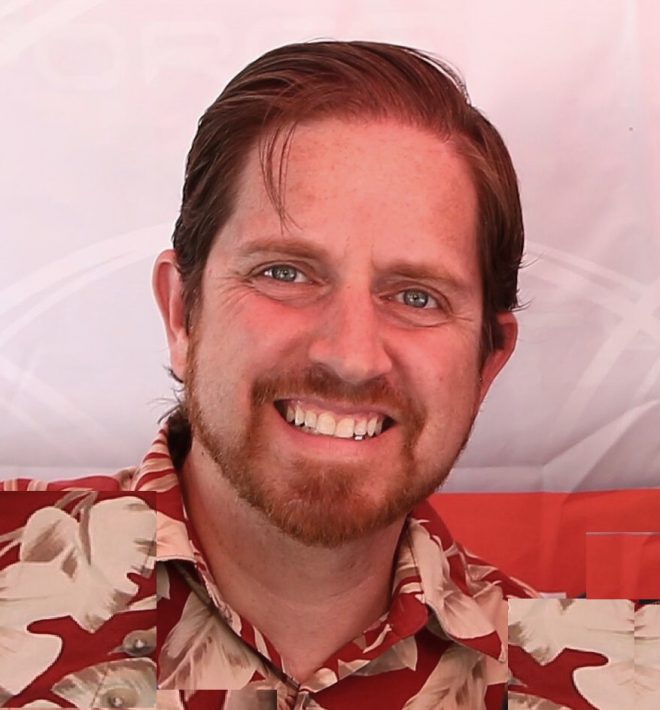 Rish Outfield can be found regularly at The Dunesteef podcast, which he produces with Big Anklevich, and you can hear him pretty much everywhere in the genre story pod-o-sphere. You can find him online.