“Do you want me to drive for a while?” my mother asked from the front passenger seat. It was the middle of the night but, unlike my older sister, I couldn’t sleep. The desert streaked by just out of sight of the headlights. Off in the distance I could occasionally see a cluster of lights. I often wondered if there were kids like me asleep in their beds in little houses. Kids who didn’t have crazy fathers who insisted on driving everywhere because planes and trains were too expensive and buses were too slow.

“I’m good until Tucson,” said my dad. He and Mom traded off driving since we never stopped at a hotel because Dad said he’d never pay hard-earned money just for sleeping. “I could use another cup of that coffee if there’s any left.”

Mom unscrewed the lid from a battered aluminum thermos in a ritual that I’d seen her perform a hundred times.  She’d pour the dark, steaming liquid – rarely spilling a drop – into Dad’s big travel mug. He’d complain about how bad restaurant coffee was.  I didn’t wait for Dad’s expected comment. I just looked out the window. Where the heck were we?

Considering that I’d been sitting in a SUV for the last two days since we left Grandma’s house, I answered truthfully, “I guess I’m not very tired. Dad, what’s that big lake off to our right?”

“A lake?” asked Mom, opening and looking at an atlas more battered than the thermos. “There’s nothing bigger than a pond for hundreds of miles. What are you seeing?”

She peered out her window into the darkness. “Stan, he’s right. I can see the full moon reflected on a big lake out there.”

Dad didn’t like to use the interstate highway in case there were tolls, so we took the back roads whenever we traveled. Unfortunately, Dad didn’t have much of a sense of direction. If Mom was napping, Dad would explore new, and unnecessary, territory, usually in the exact opposite direction from where we needed to be. My sister and I called them ‘Dad’s Long Cuts.’

“Well, it’s about time for a potty break anyway,” said Dad. “I’ll find a place to pull over up ahead.”

“I’d prefer a service station restroom to a bush,” said Mom. This was another ritual. Dad had a bladder the size of a kiddie pool, and he never pulled over until all the rest of us were squirming and begging.

“Randy!” my sister screamed and punched me.

She made a face and pointed to her window.  “Like that thing would fool anyone.”

I stared at the strange creature pressed against the glass of Trudy’s window.  It looked like a hairless bat if a bat had tentacles with suction cups.

“What is it?” she asked, turning from the map to look at Trudy.

She gasped. “Stan! There’s something on Trudy’s window.”

“It’s just one of Randy’s plastic toys,” insisted Trudy.  She started to roll down the window.

Just then something smacked against the front window.  Dad swerved and cursed. “Did you see that, hon? It looked like an albino bat!”

“Yes, dear.  I think one of them is on Trudy’s window.  Trudy, don’t open that. Randy, if this is one of your practical jokes, you’re going to be grounded for a year.”

“Hang on!” yelled Dad as more of the unusual bats bounced off the windshield.  During the swerving back and forth, Trudy’s bat slid off the glass and flew away into the darkness.

Dad slowed down and nothing else hit the SUV.  “What in the world do you suppose that was?” he asked.

“Maybe a group of albino bats hunting for insects,” said Mom, always the practical one.  “Wasn’t that exciting, kids?”

Trudy looked questioningly at me and I shrugged.  “Yes, Mom,” I said.

“Hey,” said Trudy, looking out her window.  “What’s wrong with the moon?”

Mom looked around.  “Where, dear?”

I bent over and looked out her window.  There did appear to be two full moons in the night sky, one smaller than the other.  Neither had the man in the moon face I was used to. Trudy shoved me back onto my side of the seat.

“Probably just some optical illusion,” said Dad.  “The desert does that sometimes. You know, like a mirage.”

This time Trudy gave me a look that said “the old man is crazy,” but she remained silent as she turned back to the window.

“Hey, I see a station up ahead,” said Dad. “We’re lucky they’re still open after midnight.”

When we pulled up to the pump, a buzzer went off.  Dad looked down at the hose he’d run over when we got out.  “Wow,” he said, “I haven’t seen one of those in years. You don’t suppose they still have full service out there in the middle of nowhere?”

“I don’t care,” said Mom, “just as long as no one gets between me and the bathroom.  Come on, Trudy.” My sister was still squinting up at the moons.

The station was brightly lit, very clean, and surrounded by water.  I could hear it lapping against the edges of the highway we’d just come in on.  The air was warm, warmer than I expected the desert air to be at night.

“What’ll it be?” asked a little man appearing out of nowhere.  Dad and I both jumped. In the bright lights, he looked faintly Asian or perhaps Eskimo.  His face was lined with enough wrinkles to make him look like he’d been soaking in a tub too long.  He wore a coverall with an unfamiliar logo and wasn’t much taller than I was.

The old man, busy with the gas pump, looked at Dad for a minute and nodded. “That will be fine. Where you folks headed for so late?”

Again the old man paused for a moment before speaking.  “No. You’ve got off on the wrong road. You need to go back to the last fork and go north.”

“Dang it!” said Dad, moving out of the old man’s way as he started to wash the SUV windows.

“Town?  No town,” said the old man, taking Dad’s credit card.  Even in the bright lights, the service station attendant’s skin looked gray. “Go back to the fork in the road,” he repeated.

Something nearby bellowed out on the water. The loud roar sounded like it was made by something that was a cross between a lion and a train whistle. Dad and I both jumped and then laughed at our skittishness, but I was glad that it was too dark to see what animal had made that noise.

“You’d better hit the bathroom, son,” said Dad. “I’m going to see if they can refill our thermos.”

I nodded and headed toward the bright lights of the building.  Mom and Trudy were coming out with an armload of snacks.

“Their stuff is very reasonable,” said practical Mom.  “Although where they got purple chocolate, I’ll never know.”

“You’d better get in the car and lock the doors,” I warned.  “Dad and I heard something big and loud out on the lake.”

“Yeah,” teased Trudy. “It was probably a brontosaurus looking for his mate. Come on, Mom. Look, this National Inquirer has a story about President Presley!  What a hoot.”

I hurried inside and went to the bathroom. On the way out, I grabbed some blue potato chips and paid for them with change in my pocket. The pretty blonde behind the counter looked at the silver strangely before she said, “This will do. Have a good trip back to the fork in the road.”

I nodded at her, noticing that she hadn’t picked up the money.  I don’t think she moved or even blinked while I was in there.

“Dad, I think we better go,” I said as I got in the car and locked my door.  He was already back in the driver’s seat and looking at the map.

“I don’t see a fork in the road,” he complained. “I don’t know what that old man was talking about.”

“Just go back the way we came, Dad,” I said. “They probably have tourists lost out here all the time.”

“Okay,” he said, starting the SUV and turning around. “It’s too bad that we couldn’t see this place in the daylight. It might be a real tourist attraction.”

I didn’t say anything.  I just stared at the two moons.

“Coffee, dear?” asked Mom, reclaiming the map. Trudy was busy reading the Interdimensional Inquirer.  Behind the smallest moon, a point of light appeared and streaked toward the service station.  As I turned my head to look back, I really wasn’t surprised to see what looked like a flying saucer float down and hover beside a pump.

I turned back around and closed my eyes, hoping we found the fork in the road before the sun came up. 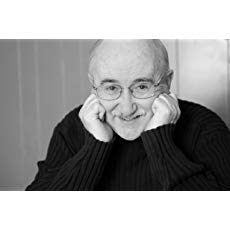 Tom Howard is a fantasy and science fiction short story writer who lives in Little Rock, Arkansas. His muses (or amuses) are his children, his friends, and the Central Arkansas Speculative Fiction Writers’ Group.

Norm Sherman is the multi-talented master of all things weird and wonderful. In addition to founding, hosting, and producing the Drabblecast, hosting and co-editing Escape Pod, and creating his own original music, he also runs a non-profit organization.