Come in, Mr. Unger. Now, what’s all this fuss about? You’ve created quite a stir within the Astronomy Department.

I’m sorry sir. It was unintentional. I was setting up a spectroscopy demonstration for my Astronomy 101 class. I used the Talbot ECR 394 with —-

Well sir, I did a test analysis of Mars, and, well, it showed oxygen. Lots of oxygen.

Obviously there was something wrong with the machine or its calibration.

That’s what I thought too. So I tried a second spectroscope. The Marchand 227—

The Marchand always was a little quirky.

Yes sir, so I ran the same tests on the Dorushuk equipment and—

The results were the same.

Then it was a calibration problem. You were picking up data from Earth’s own atmosphere.

I thought of that, sir, so I requested some imaging time on the ESA’s orbiting IR Spectrometer—

Which is how this was brought to my attention.

Yes, sir. In the meantime, just for the hell of it, I did the same analysis on Venus.

Did you now? I trust you found plenty of CO2?

Yes, but also oxygen in almost the same amounts. But what was really crazy was the data I received from a thermal imaging scan. The temperatures were nowhere near what they should have been. In fact, they were practically—-

Um… is that a hair dryer?

This? Well, I suppose it would dry hair. For about a nanosecond before disintegrating it and the head it is attached to into their component atoms.

I don’t like practical jokes, sir, and this particular joke is in pretty poor taste.

On the contrary, Mr. Unger, were this a practical joke, it would be a most excellent one indeed. Unfortunately, this is no joke. Ah-ah-ah, do stand still please.

Or you’ll disintegrate me?

Depending on the setting, this device can indeed disintegrate you, but it can also stun you, shrink you, or selectively erase memories.

What if I told you that I was not actually from Hoboken, New Jersey, but instead from a small town at the foot of Olympus Mons?

I can see that you need further convincing. You are familiar with Miss Kellerman from the Biology Department?

Of course. Well, what if I told you that Miss Kellerman was actually a native of the planet Venus?

Miss Kellerman, would you come in here for a moment please?

Sure. Men are from Mars, women are from—–GAHHH! What’s with the Sleestak costume!?

Actually, Miss Kellerman is out of costume. And I assure you any resemblance to the denizens of The Lost Land—

Land of the Lost.

Yes. Any resemblance to those creatures is purely superficial. Szzzzzzzaki, or Miss Kellerman, is far more quick and agile. Were she to face one of your storied velociraptors unarmed, it would be a toss-up as to the winner. Szzzzzzzaki, you are acquainted with Mr. Unger in Astronomy?

Is that a friendly hiss or an ‘I’m going to eat you’ hiss?

Miss Kellerman needs her vocorder to mimic human speech. The simplest literal translation would be, ‘You smell like a swamp lurker’s leavings.’ High praise in her culture, I might add.

Well, she certainly looks the part. But you look human as far as I can tell.

Ah, yes. One minute while I — damn —- Szzzzzzzaki, would you be a dear and help me with this zipper? Thank you. Ahhhhh. Much better.

You’ve got to be kidding me.

More of an olive, actually.

And an extra pair of arms… of course. Why not?

They do make multitasking a breeze. Now, what we need to decide now is what to do with you Mr. Unger. But first I want you to listen carefully.

Everything you know about Mars and Venus, their compositions and atmospheres, their surface temperatures, their geography, all of it is a carefully constructed fiction.

That’s impossible. How can you hide something like that?

Venus is a young world, very much like Earth millions of years ago during the age of the dinosaurs. And, in fact, they do have dinosaurs, or creatures so near to those who once roamed Earth as to make any differences academic.

Mars, in contrast, is an old world, and possessed of an old culture. We have canals, towering spires, and great sailing ships which criss-cross not blue oceans of water but red seas of sand.

We’ve been studying Mars and Venus for centuries, and in the last few decades have sent probes to their surfaces. Not one found any trace of life, much less civilization. How do you explain away a hundred years of solid scientific data?

Explain it? It’s simple, Mr. Unger. I and my colleagues, along with trusted friends of your own race, are responsible for almost all of that data. We lived in perfect isolation until one of your astronomers, Percival Lowell, discerned the Martian canal system at the turn of the last century. He even mapped them fairly accurately.

But it was determined that they were optical illusions.

But I just don’t see how you could create a deception on that scale. Anyone could get a spectrometer.

But how many people could use it properly or interpret the data? You took it on faith that Venus is a boiling, lifeless greenhouse and that Mars was a long dead world. Did you come to this determination on your own, recent events notwithstanding? Of course not. Did you travel to these worlds just to see for yourself? Obviously not. How many average people would even question this information? They can’t actually verify it themselves, and even you took the word of others and information from books to be irrefutable truth.

Surely you can’t control every single astronomer on the planet?

The skills to actually study a planet in detail are rare, access to the necessary equipment even rarer, and we control most of that. As for the occasional individual like yourself who stumbles upon an inconvenient fact here or there, well, they are quickly silenced?

Oh, don’t be so dramatic. They have a few selective memories erased, which is probably doing them a professional favor and prevents them from becoming laughing-stocks.

And if somehow I did tell the world?

That will not happen, I assure you. No one would believe you, for one thing. However, we certainly can’t have someone who knows about us running around.

So you’re going to erase my memories?

Perhaps. Or we may—

Probably not. I would only do so in self-defence, though I doubt Szzzzzzzaki would give you more than a quarter second to make a move.

Are you afraid I’ll interfere with your plans to take over the Earth? Because you’d be right. How many of you are there? How long has this been going on?

That was the sound of a Venusian laughing.

You won’t be laughing when we rise up and send you packing back to your own planet with your tails between your legs.

Relax, Mr. Unger. We have no intention of invading Earth or taking over or forcing you to work in the mines of Titan.

Then what do you want?

Merely to be left alone, Mr. Unger. Many of us, myself included, like Earthlings. Especially your sitcoms. But we like Earthlings right where they are here on Earth. If Earth knew there were two more habitable planets in this system, how long do you think it would be before the explorers landed? Then the colonists. Then the businessmen, the miners and industrialists. And worse still… tourists. How long before Mars and Venus are merely occupied territory, third world… well, worlds, destined to be mere client states and watch their own culture disappear.

You don’t know that.

We’d rather not take chances. Venus is young and vigorous, and certainly needs no interference in its growth. Mars, on the other hand, is in its twilight, our Golden Age having passed about the same time you were inventing the wheel. You might even say we’re a fading race, but we’d like to live out our old age in quiet dignity, thank you very much.

And women, of course. It’s a lot to take in.

You probably won’t have to worry about it much longer.

Ah, hell, you might as well zap me with your memory eraser then.

Of course, there is an alternative.

Besides disintegration. I find the fact that you haven’t passed out or run off screaming and flapping your arms promising. Perhaps a change of scenery would do you some good.

You want to transfer me? Great. Shuffle me off to an adjunct position at Podunk U where I’ll be all but out of the academic community, I bet.

I was thinking more along the lines of Cydonia Technical Institute.

Where’s that, in West Virg—wait a second, Cydonia? On Mars?

There’s also a substantial number of… expatriates… so you’d hardly be the only Earthling.

That would be incredible! But what about Venus?

Being that you are not a trained Navy SEAL, your life expectancy on Venus would be, oh, about five minutes.

And if I was a Navy SEAL?

Seven minutes. I’m afraid Venus is out of the question. Far too humid there anyway. As it is, you’re in luck. There’s a transport leaving in three days. You can be on Mars in seven. I actually envy you, Mr. Unger. I haven’t been home in years.

And if I don’t want a transfer?

You go back to class with a slight headache and no memory of this meeting or your spectroscope readings, and you will have a sudden interest in studying distant stars rather than the boring and lifeless worlds in our own solar system.

Your next class is in, let’s see, a little under five minutes. I’ll give you four to make your decision. 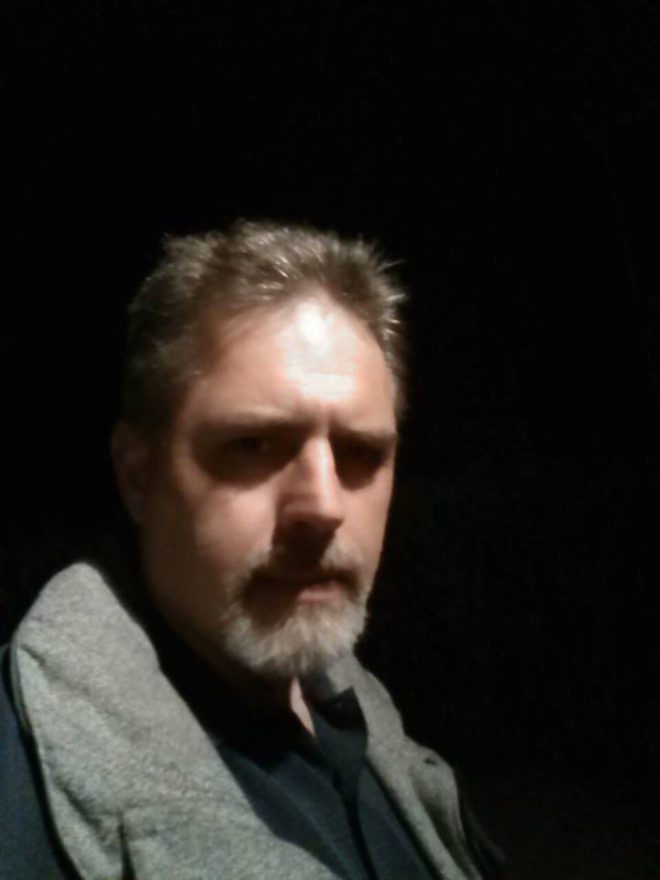 Brian Lawrence Hurrel is a lifelong science fiction fan, and is especially fond of Golden Age stories from the forties and fifties. His fiction has appeared in the science journal Nature and magazines such as Daily Science Fiction and Bete Noir. A former high school English and History teacher, he now makes a living as a technical writer and communications consultant. His previous occupations over the years include machine assembler, carpet installer, cab driver, and US Marine. He lives in New Jersey with his wife and son. You can follow him on Twitter. 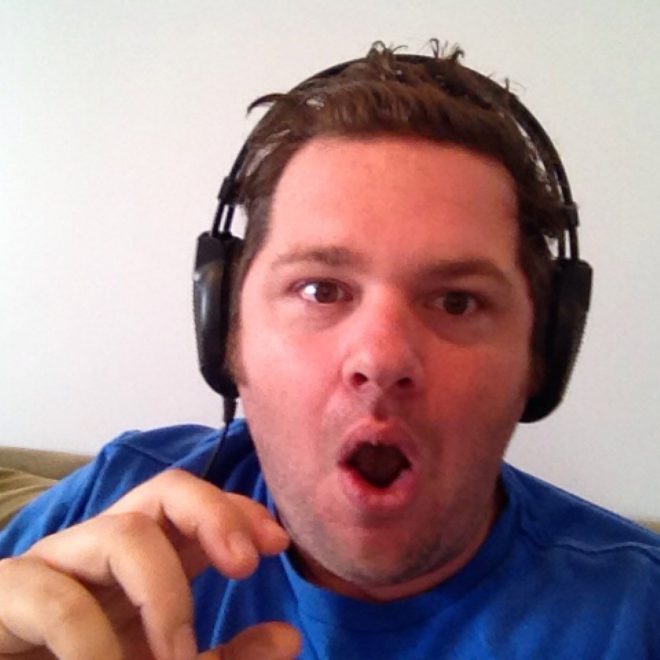 Dave Thompson is a pretty awesome guy, even if he disparages pumpkin beer. He lives outside Los Angeles with his wife and three children. Together with co-editor Anna Schwind, he ran PodCastle for five amazing years, stepping down to focus on his own writing in 2015. You can find two of his audiobook narrations on Amazon: Norse Code by Greg Van Eekhout and Briarpatch by Tim Pratt.

Dave is an Escape Artists’ Worldwalker and Storyteller, having been published in, and narrated for, all four EA podcasts.